I like pictures, photographs to be exact. It’s likely a family thing. My parents had lots of photos. My mother in particular had many photos of her teenage and college years. She had even more, but her mother, enveloped in what must have been emotional or mental illness, shredded her photo albums. Still, there were a lot of photos of my mother at various stages of her life. She always looked like Mom in them, even if the image was of a younger and smaller version.

My paternal grandmother loved photos. She had many boxes full. We usually visited Granny on Sundays in the small Eastern Kentucky town of Evarts. Granny had framed photos scattered about her house in addition to the boxes. She said she would save money to have photos taken of her children whenever there was a photographer in town. Granny’s love of photos is why I have a framed photo of my father at 4 months old: 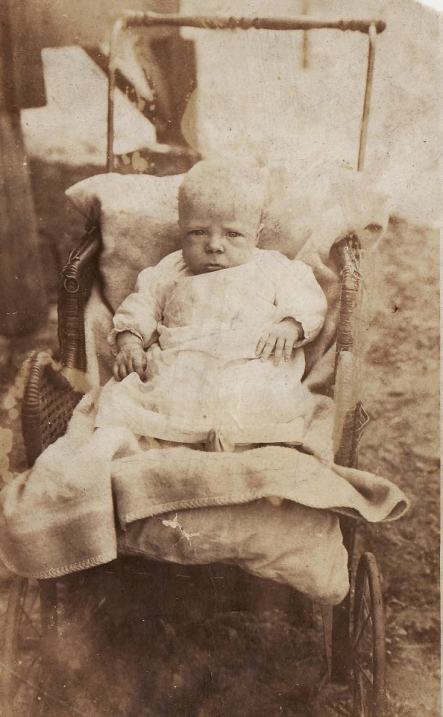 Dad often said that this “little fellow” had no idea what a tough world he was being sent into in 1925.

Photos tell stories, of course, but often you must know a lot of background before you know the story. That is certainly true of this photo (of my favorites):

As photography goes, it’s unremarkable. The lighting isn’t ideal and the color is a bit odd. My mother, for example, was quite pale. She never had that much color. Regardless, I like the people in it. The date was August 11, 1987, my 25th birthday.  It’s in my parents’ home in Loyall, Kentucky. It was my home, too, from age 12 on. That’s me, the Birthday Boy, behind the cake. On the left is my younger brother, Richard Kent Williams, born March 16, 1967. My parents are behind me–Earl Malone Williams and Anna Muriel Dye Williams. I’m not sure about the photographer, but I assume it was my future wife, Sherry.  It was important to my mother that I come home for my birthday, so I did in 1987 like every year expect 1982 when I was stranded in Lexington, Kentucky without a car. So, I guess the story is that I came home for my birthday, and we posed for a photo. It is also worth noting that birthdays were the rare occasions when my mother would pose for a photo. Otherwise, she was like pursuing J.D. Salinger for a portrait sitting.

There’s more there, of course. My Dad was 62 years old. Mom was 57. My parents shared the same birthday–January 19. From a young age, I knew that at any given time, they were five years apart in age. Dad was in remarkably good health, considering that he didn’t exercise or eat right or even ever see a doctor. Mom, on the other hand, had only recently passed her five-year anniversary of a breast cancer diagnosis. Her health had been poor, not so much because of the cancer but more from the “cure,” a toxic cocktail of chemicals which eradicated cancer cells but left her weak and unsteady. Today, I also know that Mom suffered from depression, at least that’s my unprofessional diagnosis. In this photo, I didn’t think any such thing. I thought she was just prone to spells of sadness, much like she described her own mother.

As I write this, I’m 52, but I’m not 52 in that photo. I’m 25. It’s tempting to wax nostalgic or melancholy and think about what was or what was to come. For example, almost six weeks later to the day this photo was taken, Richard was dead. As far as I know, this is the last photo of him. He’s fine in the photo. I like that. Like most people who die young, he became his death. Here, he’s just a 20-year-old posing for a birthday picture with his brother.

Here, Dad hadn’t had a heart attack, like he would two years later, radically changing his lifestyle (for the better, I should add). Mom would have her share of health woes in years to come, but not on that day. Me? I was a 25-year-old who finally finished school and was about to start a career as a lawyer. I hadn’t had the ups and downs of that career and the self-imposed stress which would help make me the exact type of person that this young man loathed–pompous, self-important and with an over-inflated view of his own significance.

I know that house well. My parents built it, and I thought it was a mansion when we moved in.  It was a classic 1970’s split-level home with four levels, but it had things I’d only imagined in my 12 years–air conditioning, for example. It had carpet all over the house, too! I still shared a room with my younger brother, but that was much better than sharing it was my younger and older brothers. After my father died in 2008, I sold the house, but I never out-grew my fascination with it.

A friend once told me that life “comes at you at the speed of light at point-blank range.”  What he meant, I think, was that things happen all the time, every day, and we just have to deal with them. It’s tempting to look at this or any other old photo and ponder all the things that were to come. I prefer to think that none of those things, good or bad, happened to those folks. They are frozen in that photo.

Sometimes, though, I do wonder about what those folks would think about what was to come. None of us would have accurately predicted the future. Unlike that young fellow in the photo, I’m the father of three sons. I didn’t even ponder such things in those days. Now, I’m the one who poses with his sons for photos:

None of us in this photo knows what’s coming, either. It will surely come, of course, and we’ll deal with it. Or we won’t.

In the years after my 25th birthday, I wasted much of my young adulthood planning and hoping for the future, much of that little more than self-centered scheming to try to make the world suit my desires. This peculiar form of madness masqueraded as ambition. When I see these old photos, I realize how little I knew then. Then again, that 25 year old would be stoked to know about all the cool things that were to come. His view of the future sold himself short. There was a lot more growing up to do and the pains that go with it. Everything turned out pretty sweet.

In some sense, we’re still in 1987, I suppose, celebrating that birthday. At least that’s what they’re doing in the photo. That’s where I go when I look at it. I can’t claim to be the same person I was at 25, but that is me in the photo. I know, because I have the picture to prove it.