My earliest memory of being a football fan was a 1969 Craig Morton football card.  I was seven years old, and Morton was the quarterback of the Dallas Cowboys.  I don’t know why, but I liked that card.  It was held in almost as high esteem as my 1969 Willie Mays card, which I carried in my pocket.  Because I liked Morton’s card, I also liked the Cowboys.  It was that simple. I wouldn’t always like Craig Morton, but I always liked the Cowboys. 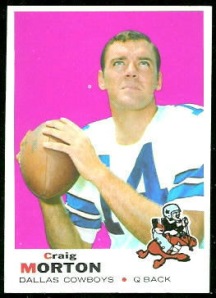 The first football game I remember watching was Superbowl V.  Dallas v. Baltimore, 1971.  It was actually a really crappy game, but I got to see Craig Morton play.  I thought that was cool.  My Dad watched the game with me and talked about the “other” quarterback for Dallas, a guy named Roger Staubach who had served four years in the Navy.  Dad said he was great, so he must be.  Understand that my Dad had been a Redskins fan, because the Redskins were broadcast on WLW’s 1,00o,ooo watt signal, and he heard a lot of their games.  But if his 8 year old liked the Cowboys, so did he.  Plus, Staubach was a military man, which Dad held in high regard.  Alas, Dallas lost when a long-haired kicker named Jim O’Brien kicked a last second field goal.  I hated that dude.  I was crushed by a sporting event for the first of many, many times to come.

I was primed for the 1971 NFL season.  Dallas coach Tom Landry devised an ill-conceived rotating quarterback system with Morton and Staubach, but I actually got to see the great Staubach play.  As much as a 9 year old kid could decipher, he was as good as Dad advertised.  He scrambled, he ran the ball, he threw the ball.  By then, I had also become a die hard baseball fan who worshipped at the feet of Johnny Bench.  Staubach was the football Johnny Bench.

Eventually Staubach overtook Morton as the Dallas starting quarterback. And the Cowboys won.  And won.  The Cowboys were back in the Superbowl.  I watched every dominating second of Superbowl VI against Miami.  Touchdowns by Lance Alworth and Mike Ditka; a 29 yard sack by Bob Lilly; Ditka on an end around; Staubach scrambling; Duane Thomas carrying the ball; Walt Garrison biting his tongue with blood pouring out of his mouth; and Chuck Howley returning an interception only to fall out of bounds when he ran out of steam.  Cowboys 24, Dolphins 3.  It may say something about my life, but I don’t know if any one event ever made me happier than that game.

If you ever see the NFL Films highlights of that game, watch at the end.  When the final seconds are winding down, Craig Morton shakes Coach Landry’s hand and says:  “Congratulations, Coach.  I’m happy for you.”  Morton, who lost his job, was on his way out of Dallas.  He didn’t play in the game.  He had every reason to resent Landry, but he was happy.  I like to think he was a really good guy and worthy of my admiration.

Now, back to Staubach.  I never enjoyed watching any athlete as much as I did this man.  He led comebacks, he played hurt and he was a genuinely good guy.  A lot of folks hate the Cowboys, and–by extension–anyone who played for them.  But, you never heard Staubach called a phony or fake.  He was married, religious and a straight arrow.  If he had feet of clay, he never showed them.

I am over 50 years old, and I don’t remember a lot of details of my childhood, but I remember these things like yesterday:

Staubach retired in 1979 after multiple concussions.  I was a teenager by then and too cool to be crushed by such things, but I was.  I’ve remained a football fan.  As painful as it is today, I’m still a Cowboys fan, but nothing compares to a kid hero-worshipping his favorite player.  I lived and died with his exploits.

It was in the those days that the Cowboys became known as America’s Team, thanks to NFL Films.  I never thought of them as that.  They were Staubach’s team, and he was Captain America. He is over 70 years old now, which makes me feel at least that old to think about it.  He’s still Mr. Cowboy, beloved in Dallas.  I think he’s still a nice guy, but I don’t really know.  Thanks to modern technology, and I can go on the Internet and watch him play any time I want.  I get to be a kid again.  And that is definitely cool.  Thanks, Captain America.