This title, of course, is deceiving. I’ve never been a hippie. I was born in 1962, far too late in the century to have become a hippie. I was, however, fascinated by hippies. They seemed cool. They seemed–appropriately enough–hip.

Growing up in Harlan County, Kentucky, there were no hippies or at least there was no real hippie movement. Oh, there were some hippies over in Letcher County–they founded Appalshop. In fact, they’re still there. There was a time when a “busload” of hippies was rumored to be coming to Harlan County to check out our horrible living conditions. Turns out that they were just run of the mill Communists, not really hippies at all.

My older brother knew a guy who was going to become a hippie. Charles was his name. Charles had been in and out of “Reform School,” that shadowy institution that none of us really knew much about it. Charles, however, had actually been there. Charles was quite fond of my brother for some reason. You must understand that my brother was a straight A student and all round good kid. Never got in trouble. For some reason, though, he occasionally attracted “friends” who were sketchy to say the least. Charles would occasionally follow my brother home from school. He’d hang out at the house for a while until my mother fed him. Sometimes, she would even give him a couple of dollars.

Charles once followed us home from school on a rare day when my brother had a bad day at school. He had a dust-up with a teacher over some silly infraction. When we got home, my brother laid out the story to Mom. Mom had no tolerance for injustice doled out to her children and made it clear that she would deal with the situation. Charles sat at our kitchen table and took it all in. When Mom was done, he said: “Don’t you worry, Mrs. Williams. I know a feller in reform school who’s gonna kill that teacher soon as he gets out.” That’s the kind of guy Charles was. Mom just said: “Thank you, Charles.” Secretly, I hoped that guy would get out soon.

One day in the summer, I was walking home from Russell’s Grocery, when–much to my surprise–Charles stepped out from behind a tree. He was probably 15 at the time. His hair was shaved down to a close crew cut. He wore mirror sunglasses, a buck skin vest (no shirt) and love beads. “Do you know me?” “Yes, Charles, I know you.” He explained that he had been released from Reform School. Of course, he followed me home.

Mom talked to Charles about his adventures in Reform School, and he announced that he was going to move to “The City” and become a hippie. I noted that his hair was far too short, but he explained that the Draconian rules of Reform School required that look. I think that’s the last time he was at our house. I don’t think he ever became a hippie, but his ambition gave me a new-found respect for him.

Back to the real hippies. During the Summer, we would sometimes travel to Utah to visit my grandparents or to Colorado Springs to visit the Air Force Academy for whom my Dad was a recruiter. On those trips, I saw the real hippies. I saw one in a Stuckey’s somewhere in the West once. I just stared at him. I saw one get arrested on the street in Salt Lake City, too. Very cool.

Once, when we were in Salt Lake, President Nixon came to speak at Temple Square. My Papaw was a security guard at Temple Square and stood on the stage with Nixon. This was probably 1969. The hippies were out in force. War protesters carrying signs–the whole nine yards. My Dad put me on his shoulders so I could see Papaw, but really I was checking out the hippies.

Somewhere in this sea of humanity are my Papaw and Richard Nixon…and a bunch of hippies.

The only person I ever saw in Harlan County that I thought was a hippie was the son-in-law of the people who lived across the street from us. He had long hair and a beard and wore hippie clothes. My little brother and I would peek out the front window of the house just to get a look at him. I knew he was a hippie, because my Dad said so.

At this point, I should confess that I didn’t really want to be a hippie. First, hippies were draft-dodgers and war protesters, which was really frowned upon in our home. Second, let’s face facts here–hippies were dirty, and I’ve never enjoyed being dirty. Third, they were dope fiends, and I was never into the drug scene. Nevertheless, they fascinated me.

I did have some love beads. My Mom bought them from some Indian kids when we drove through an Arizona reservation one time. I wore them proudly, although I’m sure they clashed with my otherwise cherubic appearance.

I wouldn’t have been a good hippie. Oh, sure, I would have loved the lack of responsibility and free love aspect. I hated school with a passion, so “dropping out” would have been right in my wheel house. Communal living, on the other hand, has never been my “bag”–as a hippie might say. I don’t like sharing my sleeping quarters with family, much less strangers. The being filthy would have been a drag (another hippie word!). Plus, I’m a bit of a germaphobe, and most hippies looked slap eat up with germs. 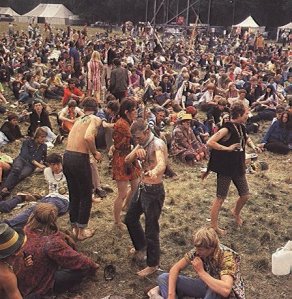 Typical hippie filthiness. There’s not enough hand sanitizer on Earth to get me in the middle of all that.

Hippies were also liberals. I’m talking real liberals, not the kind people talk about today. For example, a hippie wouldn’t take a political donation from a corporation. Of course, this assumes that a hippie would run for office which he or she certainly would not. They believed in real collective living–everyone living together and lying around in a big pile. I guess the word “Communism” comes from “commune,” and hippies loved communes. Like true Socialists, hippies would have seized the means of production if working weren’t so antithetical to the hippie credo. Now, I never was all that liberal and certainly didn’t live in a liberal culture. As I’ve noted, free love would have been cool or even groovy, but eventually the hippies and I would have clashed over something like the capital gains tax.

When they drove, hippies drove vans. I don’t even like mini-vans. Regular vans are certainly out of the question. Nowadays, full size vans are the typical mode of conveyance of serial killers. I prefer BMWs–definitely not a hippie ride. 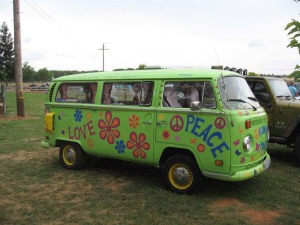 Typical hippie van. I prefer my metallic gray BMW 328. I won’t even put a bumper sticker on my car.

I would have been good at sounding like a hippie. I’ve had an annoying habit of using the word “man” most of my life, as in “What’s up, man?” “Man” was very much a hippie word. So was “dude,” although it’s made quite the comeback in recent years. I always wanted to use the word “groovy,” too. Maybe I could bill myself as “The Groovy Lawyer.” “Cool,” of course, was a staple of the hippie lexicon, borrowed from the Beatniks. I still use “cool” in everyday conversation.

I also liked hippie music. The Beatles were liked by hippies, and I like the Beatles. Same goes for Jimi Hendrix, The Doors, Led Zeppelin and countless others. Hell, I heard a recording of Charles Manson singing once, and he wasn’t half bad for a psychotic, murdering hippie. Say what you will about hippies, they dug some cool music.

So, I didn’t become a hippie, and I really had no chance to do so. That’s probably good, because you eventually become an old hippie. Worse, you become a former hippie and end up kowtowing to The Man like the rest of us, unless you become The Man. 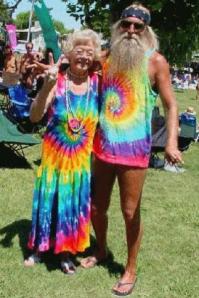 Example of the tragic outcome of the old hippie. Nothing groovy about this.

In Maui a few years ago, I met a guy who said he moved there in 1969 to live in a commune. He never left. He didn’t look much like a hippie. So, I asked him what he did now, forty years later. He said he worked in construction, but added: “I’ll always be a hippie, man.” What could I say? “That’s cool, man.” It was a groovy exchange.

Still yet, I have admiration for the hippies. I know many folks–now conservative pillars of society–who proudly declare that they are former hippies. I also know people who still claim to be hippies, although that’s doubtful. Being a hippie now is like claiming to be an anarchist. Maybe you are, but the glory days passed long ago.

So, if you’re an old hippie, I salute you. Now, get a haircut and take a bath.