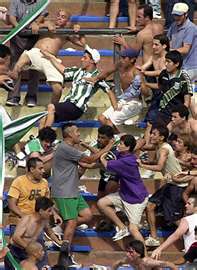 I’ve been watching some soccer lately.  I do that on occasion, like when I’m at the gym and flipping around the channels while I’m on the Stair Master.  I like sports.  Soccer is a sport.  I’m told it’s the most popular sport in the world, and that appears to be true.  Fans paint their faces and act nutty.  Sometimes, they kill each other.  Sometimes, they even kill the players.  The word “hooligan” is used almost exclusively for soccer fans these days.  I like that word, so I should like soccer, I guess.  But, I don’t. 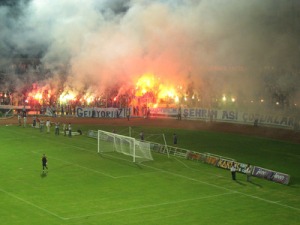 Hooligans have their own version of The Wave.

I know it’s fashionable for Americans to say they hate soccer.  I don’t hate it.  I just don’t get it.  If I had grown up playing it, that would be different.  Where I was raised, we would have been more likely to play that Afghan goat carcass polo game than soccer.  I also know why kids like it (soccer, not that goat game).  It’s a bunch of running around and kicking things.  I would have liked doing that. 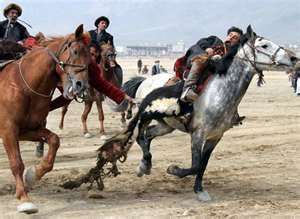 Heated buzkashi match, where the object of the game is to hurl a headless goat carcass across the goal line. How has this never caught on in Harlan County?

I also don’t dislike the foreign-ness of it.  I’d watch a buzkashi match.  In the early days of ESPN, it didn’t show any real sports, just stuff like snooker and badminton.  It did, however, have what was probably the exclusively North American right to Australian Rules Football.  I used to watch that and enjoy it.   It’s a hybrid of soccer, American football, rugby and a bar fight.  I came to believe that “Australian Rules” means no rules at all.  But, it’s not soccer–not even close.

If you’re anything like me–and you probably aren’t–you don’t much about soccer.  Watch a little, and you’ll pick up the basics.  Here are a few things I know about soccer: 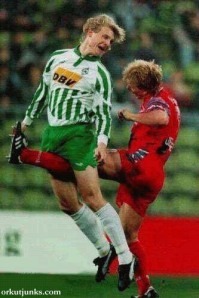 I’m not up on all the rules, but this appears to be a misconduct. 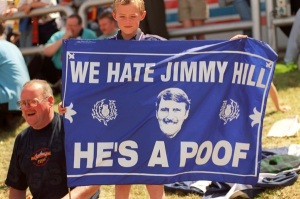 Poor Jimmy Hill. Not only is he openly hated by this child, but he’s also apparently a “poof.”

Soccer uses a ball and keeps score.  That makes it a sport by my definition.  The players are certainly athletic, running madly about the pitch.  The games are competitive, and the fans are insane.  It has all the elements of something I’d like, but I just can’t get there.  I’ve thought about it, and I have a few ideas about spicing it up.

What could soccer do to hold my interest?  Here are a few of my thoughts:

With these few little tweaks, I think I’d watch.  They could put games on TV on the weekends–Sunday would be good.  Monday night, too.  I think it would work.

If you’re a soccer lover, you’ve read this and are poised to rebuke me with the beauty of the game.  Don’t bother.  This lad sums up your views perfectly: 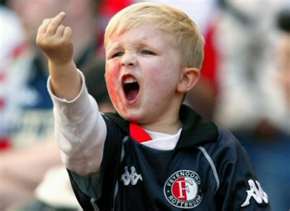 Enthusiastic young soccer fan expressing his displeasure at this post.