Groucho Marx was a good guy.  I know this from personal experience  How, you say? First, I have to give you some context.

As you may have gathered from some of my earlier posts, I was, to put it mildly, a bit of a different sort of child.  For example, I liked Richard Nixon and hippies.  At the same time, too.  It seemed reasonable to me.

I also loved the Marx Brothers.  If you don’t know the Marx Brothers, please stop reading and leave our country.  Groucho, Harpo and Chico should be well-known to any American.  You should know Zeppo, too, but he was the straight man.  You may have forgotten him.  I could forgive you if you didn’t know Gummo.  I didn’t know about him until Groucho told me.  Groucho was the best of the bunch, firing one-liners as fast as he could speak.  He always made me laugh.  Still does (“I never forget a face.  But, in your case, I’ll try to make an exception).

In addition to general oddness, I was one of those brooding kids.  I kept my own (poor) counsel and didn’t have a lot to say unless I wanted attention (which was often).  I’m fortunate to have had great parents.  In the hands of poor ones, I’m sure I would have become a sociopath.

One of the things that my parents battled from the time I was 5 years old was school, starting with kindergarten.  I hated school, only “hated” isn’t strong enough a word.  Abhor, despise, something else has to be more accurate.  I went to a fine school with good teachers and mostly good kids.  Hated it.

The first day of first grade I cried.  A lot.  So did other kids.  One little girl’s mother decided to just pull her out and wait a year.   I can still hear that mother ask my Dad:  “Are you just going to leave him here?”  Dad’s response:  “If crying helps, let him cry.  He’s here to stay.” Indeed I was.

The good news is that I eventually stopped crying, but I didn’t stop the hating.  Couldn’t stand it.  I was a good student, as had been my older brother, and a good kid.  Teachers liked me.  I had friends.  In fact, I made one of my lifelong friends by making his acquaintance while we BOTH were crying during recess.  Misery loves company.  I soldiered on making good grades and staying out of trouble.  Good student.  Good kid.

By the time I was in the 5th or 6th grade, everyone thought I was pretty much under control.  Oh, I’d moan and carry on about school on occasion but no more than any other kid.  My parents breathed a little easier.  I was still a good student, had friends and seemed okay.  A little high-strung maybe but okay in general.  Unfortunately, it was the calm before the storm.

The storm hit when I was about 11 or 12.  Today, I suspect that school counselors and psychologists would be called in.  This was the 1970’s, though.  What started was truancy.  And a lot of it.  I would be dropped at the front door of the school and walk out the back.  What did I do on those days?  Not much.  I was what became known later as a “latch key” kid.  I’d just go back home.  One of my weaknesses is my unfounded belief that I am smarter than everyone else.  It did not serve me well in this instance.

As you might suspect, my plan was ill-conceived.  Unable to convince school officials that I had contracted the Plague, I was soon found out.  Oh well.  My parents, of course, were frantic.  How could this happen?  What was wrong with the boy?  Honestly, I can’t answer that.  Maybe it was anxiety.  Probably it was some form of depression.  Could have been some kind of half-baked rebellion.  All I know is that I aged my parents in dog years for about a year.

What does all this have to do with Groucho Marx?  Bear with me.  As I said, I was a huge fan of his.  I read books about him and watched  old Marx Brothers films whenever they were on TV.  In those ancient times before the Internet, one had to really work to find out much about people–even famous ones.  You had to read books and that type of thing.

One Sunday when I was around 11 or 12, I saw a letter someone had written to Parade Magazine asking whatever happened to Groucho?  He was still alive, of course, but was a bit of a recluse.  He was in his 80’s and lived in Beverly Hills with a woman who looked after him. Erin Fleming was her name and she was either his companion, secretary, Svengali or succubus.  It depended on whom you asked.  I was intrigued. I, too, was a bit of a recluse.  I lived in Harlan, Kentucky, not Beverly Hills, but that didn’t matter.  I thought:  “I bet he’s a lonely old guy, now.”  I had a thought.  I’ll write him a letter and check on him.  Why not?

Nowadays, you can find anyone, anywhere.  40 years ago, it wasn’t so easy.  I had no address for him, but I had ingenuity.  You see, I had written many letters to baseball players over the years and knew that all you had to do was get pretty close with an address, and the Post Office would do the rest.  I figured “Groucho Marx, Beverly Hills, California” would work.  So, I wrote him a letter.

It was the typical embarrassing fan letter, “I’m a big fan, send me an autographed picture, etc.”  I was a kid, so I could be excused, I suppose.  I also asked about his health and if he had any other siblings besides the famous ones.  I wanted him to know I was genuinely concerned with his well-being.

The photo I got from Groucho in 1974. I later learned that this was from the press kit for an album released in the early 1970’s.

This was very cool.  Very, very cool. I loved it.  My parents loved it. They were very impressed.  Now, my mother was a fabulous person and a great mother.  She, however, tended toward the maudlin.  She loved the picture, but it made her sad.  She imagined this old man getting a letter and having nothing better to do than sign a photo and send it across the county to some kid.  Being a depressive sort myself, I agreed with her.  She said I needed to write him a thank you note.  So, I did.

It wasn’t just a thank you note, of course.  I thought of Groucho as my friend (sort of), so I told him a little about me, where I lived–that kind of thing.  I also told him that I had read about how he dropped out of school and that I thought that was very cool.   This was my plan, too.  I told him that I refuse to go to school and that it was obvious that one could be very successful without it.

I didn’t expect a response.  I really just wanted him to know how much I appreciated the photo and that I really admired him.  I was wrong.  He wrote back.  Quickly.  Here’s what he had to say: 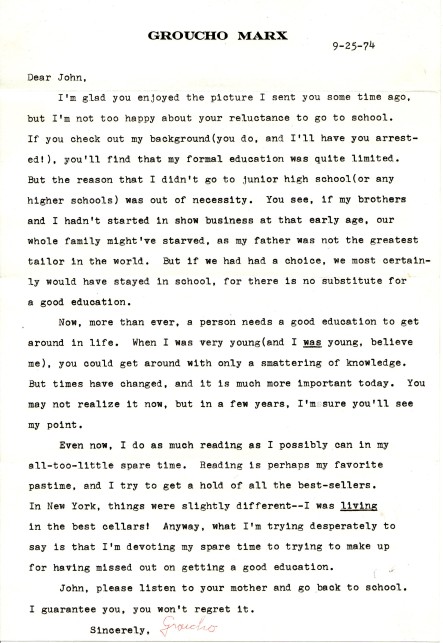 You might think this thrilled me.  You would be wrong.  I didn’t like it.  He had, as some might say, called me on my bullshit (forgive the language, but sometimes that’s what it is).  Funny thing, though, I kept the letter and read it over and over.  He was right–and pretty funny, too.   A good way to wrap this up would be to say that it inspired me and made me straighten right up.  That’s not real life.  I continued for some time to be a thorn in my parents’ sides until it all just passed.  Nevertheless, the letter made a great impression on me.  Here was a man who took the time to write a letter to a little kid he’d never meet.  It was nice.  Very nice. In fact, it’s one of the nicest things anyone has ever done for me.  I’m almost 50 now, and it still impresses me. 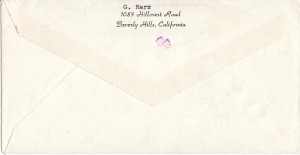 Note how someone typed “G.Marx” above the fancy engraved address.

Groucho was not generally considered a great guy.  He had difficult marriages and, by some accounts, equally difficult relationships with his children.  When he died, his son battled Erin Fleming over money from his estate–and won.  After many years of mental illness, that lady killed herself.  I guess the point of this is that there are layers to everyone–some good, some bad.

When I got older, I learned more about him.  He was a relentless letter writer.  He corresponded with everyone.  I guess was not so unusual that he wrote me a letter.  He was a friend of such diverse people as George S. Kaufmann, Dick Cavett, Alice Cooper, Elton John, Carl Sandburg and T.S. Eliot, to name a few. While he was writing letters to these folks, he found time to fire one off to a kid in Harlan County.  Cool.

A collection of Groucho’s letters (The Groucho Letters) were donated to the Library of Congress as “culturally significant.”  Groucho said that was his greatest achievement. They missed one.