University of Kentucky President Eli Capilouto has banned alcohol in certain tailgating areas for football games.  Why?  Because a group of drunken idiots got in fights at a recent game.  Of course, the idiots are apoplectic about this, because that’s how idiots react.

President Capilouto also banned DJs in those same areas. They may not have anything to do with the fights.  Maybe it’s just a nod to good taste.

(Apropos of nothing, I should note that a friend of mine and I always refer to the President as “Doctor Copulate-O.”  Oh, how we laugh when we say that)

This recent edict got me thinking about my own history as a fan and various fan personalities.  I don’t have much to say about fans acting like fools.  My friend, Meisterblogger, wrote an excellent piece on that subject.  I have nothing to add to that.  It does, however, make me ponder the behavior of fans, behavior in which I have engaged on some level my entire life.

I’m a sports fan.  Always have been.  When did it start?  I can’t really remember, but I know it started with baseball cards.  The one I remember best was a 1966 Willie Mays card.  For some reason, I loved that card.  I kept it under the desktop glass of a desk in our house.  I would sit and just look at it.  I loved it right up until my little brother managed to get it out from under the glass and tear it in half.  It was then replaced by a 1969 Willie Mays, which I kept in my pocket for safekeeping. 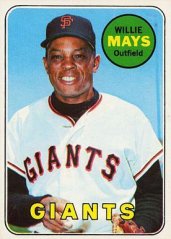 I carried the Say Hey Kid in my pocket for years.

I’ve cheered my teams.  I’ve screamed myself hoarse.  I’ve also cried.  Yes, cried.  Literally.  Who are my teams?  At various times, I’ve been fanatic about:

There was only one Wilt. 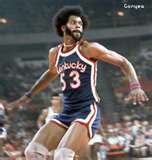 Artis Gilmore was everything cool about the ABA

Against this backdrop, I’ve learned a lot about fans.  I am one.  Who are they?

I’ve been this guy.  He shows up at 9:00 a.m. to tailgate for a 7:30 p.m. kickoff.  He drinks and drinks and drinks.  He’s loud and obnoxious.  He freely uses foul language.  He’ll insult opposing fans.  He’ll insult his friends. He’ll pick fights.  He’ll randomly vomit.  He watches the game–maybe.  It doesn’t matter if he does or not, because he won’t remember it.

Here’s how I used to do it.  Show up several hours before kickoff with a grocery bag full of beer.  Drink the beer.  Wander from the tailgate to tailgate bumming more beer.  Watch the football game.  Try not to pass out or puke.  Drink more.

I would find myself with people I didn’t know.  Drinking and cheering.  High-fiving and hugging.  Once, I was tailgating and a woman asked of me and a friend:  “Do you mother****ers wanna dance?”  We declined. That’s the crowd we were in.

Drunk Fan isn’t to be confused with his cousin, Drinking Fan, a mostly amiable fellow who occasionally goes over the edge.  He’s okay.

This guy believes he’s part of the team.  More accurately, he is the team, and the team is him.  They are one.  WE win.  He wears jerseys of his team.  He paints his face.  He names his kids after players.

If his team wins, this guy is a better person.  Not only that, he’s just better in general.  Healthier, happier, stronger.  Better.  He will gloat.  He will post things on Facebook like:

Of course, he can also lose.  Losing is crippling.  He can’t face the light of day.  He won’t read the papers or watch TV, lest he be exposed to the terrible truth of his own failings.  Losing makes him a lesser person.  Unworthy.  Yet, he will tweet this:

The Demented Fan sees each game as a personal triumph or failure. It never dawns on him that he isn’t playing and has no stake in the outcome of games played by others who are not conscious of his existence.  Sadly, I’ve been there, too.  Why, oh, why, dear God, did they lose???  My cheering, my clothing, my very presence should have made the difference.  They did not.  I have failed.  Life sucks.

He rants.  He raves.  He yells obscenities.  He throws things.  He does all of these things just watching on TV.  I’ve been that guy, too:

Remember what I said above about fans acting like fools?  Burning couches and fistfights are for fools.  My actions were acts of passion.  Fortunately, I’ve outgrown this behavior–for the most part.  Now, my wife acts worse than I do.  At least I get to see what an annoying pain in the ass I was.

I really have nothing to say about this guy.  He is just one step above the contemptible Fair Weather Fan.  The Casual Fan only pretends to be a fan.  He never loses sleep or acts like a jackass over a game.  He doesn’t know the players’ birthdays or their hometowns.  He’s a fraud.  I’ve never been him, and I won’t be.

I have crawled from top to bottom of the Fan’s Tree of Life.  I’m now a passionate–yet mostly normal–fan.  I still get agitated and take it too seriously.  But, I tell myself that the sun will still come up tomorrow and life is good.  I even believe that sometimes.

So, what kind of fan are YOU?