Until a few days ago, only football fans knew the name Manti Te’o.  Now, just about everyone knows his name.  Why?  He has a fake girlfriend.  Or should I say “had?”  You see, she died of leukemia, but not really.  She fake died, which fake people can do.  Te’o says he’s the victim of hoax. Made up girlfriend. Made up love.  Made up death.  If so, there are some sick puppies out there who are definitely NOT Manti Te’o fans.

Te’o is a football player for the University of Notre Dame.  He is Hawaiian.  I know this because of the random apostrophe in his name.  He’s a linebacker and an excellent one at that.  He is also a famous football player–so famous that he was runner-up for the Heisman Trophy.  It’s easy to be a famous football player at Notre Dame, but winning the Heisman Trophy makes someone really famous.  Ask Johnny Manziel.  He beat out Te’o for the Heisman.  A year ago, no one had ever heard of him.  Now, he’s called Johnny Football and dates a model.   She’s a real person or so it seems.  I’ve seen pictures of her.  Then again, Te’o saw pictures of his girl friend, too.

It is beyond my abilities to unravel the Te’o mystery.  Here’s what I know.  It was widely reported that his grandmother and girlfriend died on the same day last September.  Honestly, I didn’t pay much attention to this, other than to note that it was bad deal.  Sports media beat it to death (forgive me for that).  I heard it about it every time I watched Notre Dame play, which was a lot because all their games are on TV.   Somehow, these deaths inspired Te’o to play better.  On January 16, 2013, Deadspin.com–sort of a snarky sports gossip site–ran a story that the girlfriend didn’t exist and not just because she was dead.  She wasn’t real.

Notre Dame’s athletic director held a press conference where he, too, said she wasn’t real.  Te’o was the victim of a hoax.  The AD cried, because Te’o will never “trust” again.  He didn’t say that Te’o would never love again, but that’s possible, too.  Te’o has weighed in and agreed that he is a victim. Now, he claims that it was just an Internet relationship.  They never met, but he loved her.  Okay.

As more details pour out about this, it is all very confusing.  Now, Te’o and his school claim that it was all an Internet relationship–that the two never actually met.  What did Te’o know and when did he know it?  Why did he keep quiet if, as he claims, he knew it was a hoax on December 6, 2012?  It’s a bizarre story.

Naturally, the whole weird tale got me thinking about me.  What if I had a fake Internet girlfriend?  Could I have one?  What would it be like?  What would we do?  I don’t think I would do well with a fake girlfriend for a number of reasons: 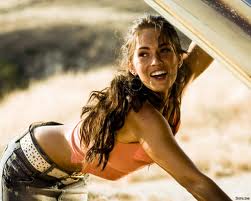 My fake girlfriend is happy when she gets to work on my car.

So, I’m out of the fake girlfriend game.  That’s a good thing, I suppose, but it doesn’t stop me from pondering about how this could happen to someone.  If you’ve seen the documentary Catfish, you know it can happen.  I will confess, though, that some of the scenes in Catfish seem contrived to me.  Maybe not. Maybe this kind of stuff is just so weird that it’s unbelievable.

Common sense seems to be one’s best protection.  Here are some things that should be red flags:

These are just a few things which come to mind.  More importantly, though, is how to tell if someone else has a fake girlfriend.  In Te’o’s case it’s pretty easy now.  What’s not so easy is trying to sort out the truth from the fiction now.  I don’t know this young man and doubt that I will ever meet him.  But I’m a lawyer, and I know a thing or two about lying.  No, not me lying–other people.

When someone lies, it’s like looking at someone with a go-funny eye.  At first, you’re not quite sure what’s up, but something is off.  Then, you get it–“he’s got a go-funny eye!”  That’s how a lie works.  You hear it, and it’s not quite right.  Something is off about it, but you’re not sure what.  It might take some digging, but you can figure it out if you have time and patience.

As a father of three sons, I also know a thing or two about lying.  (That’s right.  Your kids will lie to you.  Sorry to bust your bubble).  As I write this, my sons are 20, 17 and 10.  I’ve learned to challenge anything that sounds the least bit implausible.  For example, a few months ago, one of my sons claimed that he was robbed of ten dollars outside his school.  Was I terrified?  No, because I didn’t believe it.  I had him come to my office and explain the story in detail.  Go-funny eye.  The time line made no sense.  Why would they steal $10 but not his phone?  He swore it was true, until several hours later when he admitted he lied.  He needed $10.  Why go to such lengths for $10?  How should I know?  I’m his father, not his psychiatrist.

I suspect that Te’o is in the same position. He’s telling a story now that just doesn’t fit.  Someone pulled one over on him.  Instead of facing the embarrassment of that, he perpetuated it.   If he did, he lied.  Something about the “he’s just a victim” story sounds wrong.  Not all of it–parts of it are no doubt true.  There are parts that just don’t sound right.  Go-funny eye.

Men my age like to call college age men “boys” or “kids.”  Te’o isn’t a kid.  He’s a grown man.  If he perpetuated this story after he knew it was a hoax, he is responsible for that.  It seems that no one at Notre Dame challenged Te’o on his story. Certainly, none of the journalists who swooned over his tale of woe did.  Maybe he just thought he’d get away with it.  Usually, that’s the point of a lie.

Like I said, he’s a grown man–with a fake girlfriend.  The more cynical of us note that defensive players don’t win the Heisman.  Maybe pulling at heart-strings would help.  Now, he’s the butt of jokes (I’ve come up with some good ones myself) and a media onslaught.  Of course, Te’o may be telling the truth.  If so, truth is again stranger than fiction.