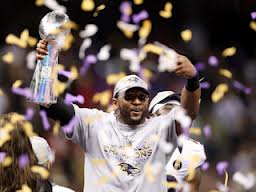 I’m a big sports fan. Huge, actually. I’ve ruined substantial chunks of my life grieving over sporting events in which I had no stake other than as a fan. None of the players or coaches knew me nor did they care one way or the other about how their pitiable performances affected me. Nevertheless, though, I grieved.

You know who else is a big sports fan? God. That’s right. Capital “G” God. The Big Guy. The Alpha and Omega. The Big I AM. How do I know that about the unknowable? Athletes have told me. Repeatedly.

Ray Lewis says so. God glorified him (or vice versa–sometimes it’s hard to follow Ray) with a Super Bowl win. After the Ravens’ win, Ray said “It’s simple: When God is for you, who can be against you?” That is pretty simple. God is all-powerful, all-knowing and omnipotent. If He’s for you, who CAN be against you? Well, a lot of people, really. The other team, for instance. Their fans. Maybe people who just generally hate your team or you personally. Atheists, too.

If it were just Ray, it wouldn’t be that big a deal. Other athletes are just as bad–or maybe it’s good. Boxers praise God–right after they beat the holy crap out of someone. “Thank you, God, for giving me the strength to inflict permanent brain damage on this other child of yours.” Basketball players do it. Baseball players. Everyone who wins has God on his or her side. Some invoke Jesus, which is really the same thing except with a decidedly Christian take.

That’s right. God picks sides. He’s picked the World Series, Super Bowls, NCAA Championships, fights–you name it. There isn’t enough hard drive in the Cloud to list all the athletes that have credited God for their wins. God plays favorites. No doubt. God is definitely a Calvinist when it comes to sports.

The uncomfortable flip side of this is that God clearly dislikes certain teams and athletes, too, not to mention their fans (like me). This is rarely acknowledged, with one notable exception. Former University of Kentucky football player Stevie Johnson is now a star wide receiver for the Buffalo Bills. A couple of years ago, he dropped a potential game-winning touchdown pass. Just dropped it. Stevie saw the hand of God in it. 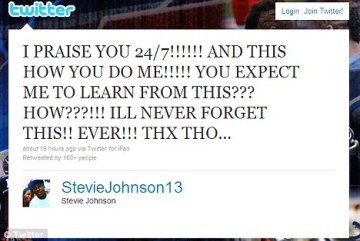 Predictably, Stevie took a lot of heat for this. But, if you are a sports fan, haven’t you at least thought this before? Sure you have. Of course, I remember Stevie catching a touchdown pass to beat the University of Louisville. An act of God, for sure.

I’ll confess that I’ve prayed to God about sports. “Oh, mighty God, PLEASE let this free throw drop!!!” Of course, this type of prayer is fruitless, but I’ve done it. My life as a sports fan has proven and disproven the existence of God many times:

I, for one, refuse to blame God for this.

For brevity’s sake, I won’t list the other 200-300 examples. One can readily see that I have struggled to see God’s handiwork in my life as a fan. For others, look no further than this year’s NCAA Football Championship. Notre Dame has Touchdown Jesus, but Alabama whipped them like Samson breaking bad on a bunch of Philistines.

The problem is that for each instance in which I have been crushed by a sporting event, others have felt an equal and opposite reaction. Call it Newton’s Law of God In Sports. He loves one team and hates the other. Okay, maybe He doesn’t hate them. Only if you’re a member of the Westboro Baptist Church do you embrace the hating God. But, at the very least, He’s cruelly indifferent to the other team and its fans.

How does this happen? Do the other fans pray better? Are the players better people? If so, what can I do to help my team? If more of our fans pray will that tip the scales? Or is the quality of the prayers, rather than the quantity, that matters most? It’s hard to say, really.

What about Tim Tebow? By all accounts, he’s a fine young man, sincere in his faith and an all around good guy. He played quarterback for the Denver Broncos in 2011 and won a bunch of games. Now, truth be told, he didn’t play particularly well, completing less than 50% of his passes. Yet, he won or, more accurately, his team won. Many folks attributed this to God. Tebow is a Christian, and God wins games for him. Many of my devoutly Christian friends manically cheered for him, as though he was the first Christian to ever play in the NFL (I don’t think he is, by the way). Then Tebow got traded to the Jets, because the Broncos preferred Peyton Manning at quarterback. Tebow barely played for the Jets and did nothing to help them win–to the extent the Jets did win. Did God turn his back on Tebow? Doubtful. Tebow just ended up on a team that didn’t want to play him. Like Tebow, Danny Wuerffel was also a Heisman Trophy winning quarterback from the University of Florida and a devout Christian. He had no success in the NFL. Why? Because that’s sports, not God.

Now, you’re thinking: “What’s your point?” Here it is: God isn’t picking games. If he did, the parochial schools would never lose, and Bob Knight would have never won a game. God is God, which is a good thing, but one can only hope that He is occupied with more important things than Ray Lewis’s retirement and my desire to see a teenaged college student make a free throw.

I won’t even belabor the obvious such as the horrific injuries–and even death–suffered by athletes. If you’re a sports fan, you can think of an almost endless list of vile humans who have excelled in sports. What about cities like Chicago and Cleveland? What are they–the Sodom and Gomorrah of sports? If God is picking sides, surely he could cut them a break.

So, the next time you think God has picked your team or favorite player, remember that just means He’s back handing someone else. Eventually, He’ll show you the hands, too. Now, don’t get me wrong. There’s nothing wrong with praising God. Some believe that He demands it. It’s just that suggesting He won a game makes as much sense as crediting the military for it. After all, we should be thankful for our soldiers, too, but let’s be reasonable.

Okay, now God, UCLA has 11 NCAA basketball titles, and Kentucky has 8. Do you think you could see your way clear to…..never mind.