I talk funny.  No, I don’t have a speech impediment.  If I did, it’s likely that very few people would mention it.  Then again, maybe they would.  Still, I talk funny, and I know it.

I didn’t always know it.  For 18 years, I thought I sounded just fine, better than most, in fact.  I grew up in Harlan County, Kentucky, the very heart of Eastern Kentucky.  Harlan is Appalachia at its finest.  We’re proud of our heritage.  We’ll tell anyone who’ll listen.  Unfortunately, many times those people won’t understand a damn word we say.

When I was 18, I went to college but not very far from home.  I attended the University of Kentucky, a mere 3 hours (at most) from Harlan County.  There were a lot of Eastern Kentuckians at U.K., and those folks became my friends.  As one friend from Bell County (Harlan’s next door neighbor) told me “We’re like Indians.  We’re lost when we leave the reservation, so we have to hang together.” So we did.

I met people from different places, and they talked funny.  They had accents.  We did, too, but not so bad.  I knew plenty of people in Harlan with accents, heavy mountain accents.  They were hard to understand even for a native.  I didn’t sound like that.  Or so I thought.

When I was 19, I met a girl from Louisville–Kentucky’s big city.  She broke the news to me about my accent. For example, I pronounced the word “light” all wrong.  It has a short “i”, not the long, flat “eyyyyyye” I used.  In fact, I was practically saying “lat” instead of “light.”  Damnation.  Who knew?  She complained about my mumbling.  Little did she know, that she should been have happy that she couldn’t understand everything I was saying.

Once someone talks about your accent, the relationship is doomed, I suppose.  Nevertheless, I realized that I did have an accent.  I’ve been cognizant of it ever since.  You can’t tell I have an accent by reading this, but I do.  It’s a pretty thick one, too.  You know what?  I don’t give a fat damn about it.  [“Fat damn” sounds really good with my accent, by the way.]

What kind do I have?  Appalachian.  That’s not southern.  I don’t sound like Foghorn Leghorn, although folks in the Northeast will ask me if I’m “from the South.”  I’m not from the South.  I’m from the Mountains.

Our accents are a mountain drawl combined with a distinct mumble.  Our words run together but kind of slowly.  We aren’t fast talkers.  Go to Michigan if you want to hear that.  Our accents have so butchered the English language over time that translation is often required:

You from upair? Translation:  Are you from up there? [Up where, you ask?  Upair.]

Them yor people?  Translation:  Are you related to those people?

He done got farred.  Translation:  That fellow was discharged from his employment.

He thoed that out the winder.  Translation:  He threw that item out of the window.

I et a mater sammich yesterdee.  Translation:  I dined on a tomato sandwich yesterday.

Them fellers fit upair.  Translation:  Two gentlemen from up there engaged in fisticuffs.

He clum upair and worked on the chimley.  Translation:  He climbed up on the house to repair the chimney.

These are but a few examples, extreme though they may be.  We’ll say “tar” instead of “tire.” Someone may be “lexicuted” rather than electrocuted.  We fish with “minners,”not minnows.  People live in hollers or they may holler at you.  We’ll even “GARNT-tee” something for you.  We can do all of this but you won’t have a damn clue if we explain it to you.

So, you’re thinking:  “You people are ignorant hill jacks.”  No, we’re not.  That’s just how we talk.  I guess we have our fair shares of idiots, but almost all of us have accents which render us, to some extent, incomprehensible.

Now, not all mountain people have accents.  Some work very hard to get rid of them or to never have them.  I’m cool with that.  That’s not how I was raised, though.  We just talked how we talked.  We didn’t really think about it much, except for my mother who was a stickler for correct grammar.  She pointed out to me on many occasions that only the lowest of trash used double negatives.  “Ain’t” made her practically shriek, but not as much as “hain’t” did.

I do feel a bit bad for the folks who lose their accents.  They become sort of like people from Nebraska.  Try to say something and sound like someone from Nebraska.  You can’t, because no one knows what they sound like.  I can identify an Appalachian accent in about 5 seconds.

One group I don’t care about is those who shed their accents because of their shame of coming from the mountains.  They don’t want to sound like us.  It’s embarrassing.  They’re above that.  They are the same folks who pontificate about people in the mountains need, when in truth they wouldn’t care if the place was used for nuclear waste disposal.

So, how thick is my accent?  I was eating at my neighborhood Waffle House recently, when the waitress asked where I was from.  When I said Harlan, she said “I thought so.”  Oh, she then added:  “Half my family is from Harlan–the half we don’t speak to.”

Recently, I was in Las Vegas and struck up a conversation with a couple of strippers on the street.  One asked:  “Where are you from?  Your accent is so cute.”  I gave her five dollars.  I also met aspiring rapper, Young Cheese.  Even he asked me where I was from. 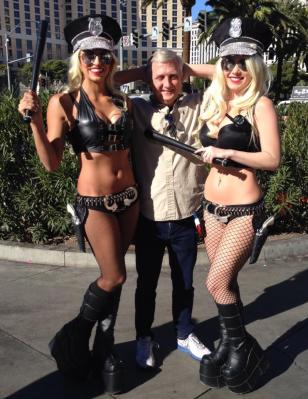 These ladies like my accent. That’s not so bad, is it?

The obvious downside to my accent is that I am often incomprehensible to the untrained ear.  I once ordered lunch in a restaurant in Gloucester, Massachusetts.  The waitress couldn’t understand me nor could I her, yet we were both speaking English.  My lunch companions worked as translators.

My own wife struggles to understand me, and we have lived together for over half our lives.  Here is a typical exchange:

…and so on and so on. It always ends with my wife pointing out that her friend Lisa can’t understand me, either.  Maybe I do mumble, but you’d think 26 years would be enough time for someone to get used to it.

[In my defense, I would note that my father often accused my mother of mumbling.  He was almost completely deaf, yet never conceded that his lack of hearing was an issue.]

As a lawyer, my accent comes in handy.  I handle many cases in Eastern Kentucky and sound the part with no real effort.  Occasionally, it’s a hindrance.  I recently tried a case in Illinois, and explained to the court reporter that she may have problems understanding me.  She did.

Mountain accents help in other ways, too.  They are really good when you threaten someone.  If someone with Locust Valley Lockjaw says he’ll kick your ass, you’ll laugh in his face.  When someone from Harlan says it–male or female–it has a ring of truth to it.  “I’ll whup your aaasss” just sounds serious.  It also makes curse words sound better. “Hell” comes out like “Haaaiiil.” Shit becomes “I don’t give a shiiiiiit.”  It creates an emphasis that others lack.  There are many more examples that good taste prevents me from discussing here.

The only time my accent bothers me is when I hear it.  I’ll hear myself on video and think “Man, oh man, I sound like a weed bender.”  I guess I do.

Naturally, many folks hear us talk and think we’re dumb. Many of these people are, in fact, dumb people with different accents. Sure, if we’re interviewed on TV, there may be subtitles, but we’re not dumb–at least not all of us. If you ARE dumb, a mountain accent won’t help. Nevertheless, it won’t actually make you dumb.

Of course, we aren’t the only people who sound funny.  New Englanders sound funny, too.  So do folks from Wisconsin.  New Yorkers are hard to understand, just like people from the deep south.  Appalachians just have the disadvantage of being in perhaps the last remaining group of people who can be openly derided with no repercussions.

Now, read this again in your best Appalachian accent. If you still don’t get it, watch the TV show Justified. It’s set in Harlan County, and they do a good job with the accents. Maybe you’ve seen the Patrick Swayze classic, Next of Kin. There are some good accents in that one, with the exception of Liam Neeson. I’m not sure what he was doing, but I’ve never heard anyone sound like that.

Aint’ got nuthin left to say about this hyere–nary a word.  I’m still upair in Lexington, but I’ve still got people in Harlan.  Reckon I’ll stay hyere, unless I end up somewheres else.  Proud to know you uns.  Holler at me if you get up this way.