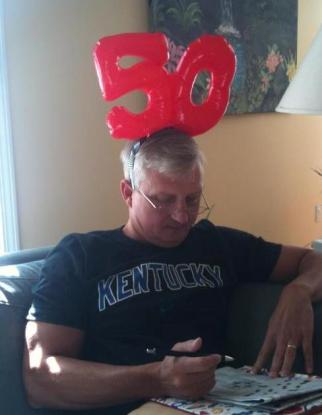 Living it up on my 50th birthday.

50 is the first age I’ve reached that sounds old.  If you’re 50, you’ve been around the block.  Lived life. Done things.  I suppose that’s all true.

If I take a close look in the mirror, I look like I’m 50.  Gray hair, wrinkles, reading glasses.  I avoid full length mirrors. As a friend of mine once said, you know you’re old when you look better in any clothes than in no clothes at all.  50.

Here are the things I know:

I DON’T KNOW EVERYTHING

Most people my age know everything.  I mean every single freaking thing there is to know.  They know about politics, sports, children, religion, health–everything.  They also don’t hesitate to share their knowledge.  Me?  I don’t know all that much.  Oh, I know a lot about a few things (the law, sports, coal mining, my kids, movies, TV) and a little about a few things (religion, politics, space travel, geography, books, money, my wife and sundry other topics).  Then, there is the vast universe of things about which I know nothing useful or nothing at all (computers, foreign languages, women, art, math, photography, physics, Ayn Rand, the Spanish-American War, George Soros, Broadway, automobile repair, plumbing and many, many other things).

It wasn’t always that way.  Like all of us, I was born knowing nothing.  By the time I was in my teens, I knew everything and held onto that for several years.  In fact, my knowledge level peaked with my actually knowing more than everything, that is, knowing not only all there is to know but also knowing things that aren’t even generally known. 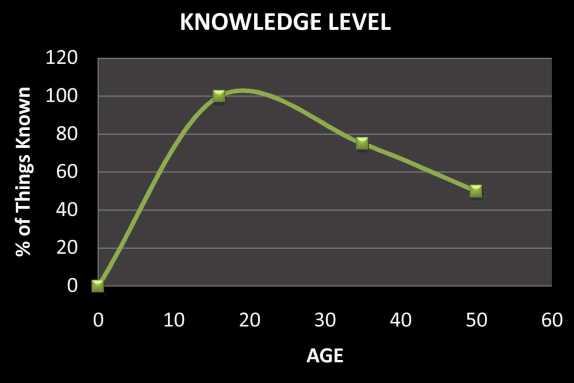 Chart showing the author’s knowledge level in relation to his age. Note that for a brief time in my late teens/early 20’s I exceeded the human capacity level for knowledge of all things.

I estimate that by the time I was 35, I only knew 75% of everything, having learned through fire that I did not know many things I had taken for granted.  For example, by then I had two children and was quite aware that there were many things I did not know, like how to prevent diaper rash.

My knowledge level has continually decreased to the point that I now know only half of everything.  Truthfully, that’s an exaggeration, as I am sure that I don’t know that much.  However, knowing that gives me extra credit and justifies inflating the figure to 50%.

I have some concern that this downward trend will continue.  Perhaps it will.  I am fortunate to have two teenage sons who can fill in the gaps of knowledge with all they know.

Folks my age are fond of saying “If I only knew then what I know now….”  What they really mean is “If only knew then what I think I know now….”  Here’s the deal, if you were young and were as opinionated and grouchy and self-righteous as most people my age, you’d have no friends.  Period.  Remember when you were a teenager.  If you’d had a friend who acted like a 50-year-old man, you would have beaten him with a bag of door knobs.

LIVING IN THE GOOD OLD DAYS

My father was fond of saying that there were no “Good Old Days.”  This was primarily because he lived a Dickensian existence of want.  Thanks to him, I lived no such childhood.  Nevertheless, I agree wholeheartedly with his assessment, albeit for different reasons.

Hey, what about the teen years?  Don’t you want to live that again?  ARE YOU CRAZY?  I had fun as a teenager, especially college, but I wouldn’t do that again for anything.  The angst, the drama, the idiotic decisions.  Being a teenager is best left to the teens.  By the time they realize they and their friends are idiots, they’ll be my age.

Here’s something that’s cool.  I’m not far away from the age where I can hug young women and say inappropriate things and be dismissed as “sweet.”  I’m not there, yet, though.  I’m still young enough to be considered creepy and dangerous.

I’m an adult. I’m 50.  I can eat pork rinds for dinner if I want.  Last night, I ate a huge piece of cheesecake.  I can do that for breakfast, too.  I can stay up late (assuming I don’t naturally just fall asleep–not insubstantial risk after sundown). These are all good things. 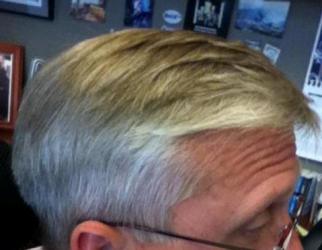 Gray hair means I’m worldly and must be taken seriously

Reading glasses also lend an air of respectability.  I can take them off and gesture with them.  I can look at things and give the impression that I’m really paying attention.  I can chew on the ear piece to appear to be deep in contemplation.

Your author demonstrates how the use of a $10 pair of reading glasses creates an authoritative aura lacking in today’s youth.

Young people have none of these tools available.  Much like wearing a tie, these simple accoutrements makes life easier.  Below is an example of my foolish efforts to be taken seriously in my youth: 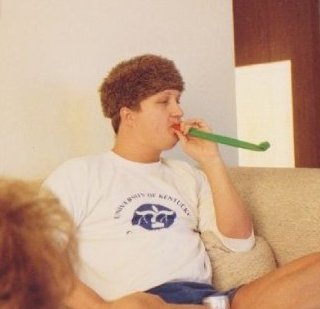 At age 26, your author naively believed that such things as a coonskin cap and a noisemaker would make others respect him.

When I go to Starbucks or a restaurant, pretty young women call me “honey” and “sweetie.”  Okay, it’s a little patronizing, but I like it.  Recently, a comely lass at the gym asked me how old I was and whether I used a trainer.  “I still got it,” I thought and responded:  “I’m 49, but I don’t use a trainer.”  She said: “Oh, I just wondered.  My dad is 45 and wants to get in shape.”  Oh well.

Mostly, it’s all good.  People call me “Sir” and “Mister.”  Some of my kids’ friends’ parents even call me “Mister.”  I don’t correct them. I like it.

Most people my age have children, or so it seems.  I’m glad I have children.  They’ve been fun and only occasionally have I wanted to kill them.

When I was young, I didn’t know if having kids would be important or not.  Then, I had one.  Man, oh, man, was it important!  I changed many, many diapers.  I got thrown up on–not to mention other bodily discharges.   I was fascinated.  Still am.

I’ve blogged about kids before, so I won’t wear you out with that again.  My point:  I’m glad I have kids, and they’ve kept me young.  At 50, I have a ten-year old son.  That’s very cool.

No one likes give credit to luck.  But, like Ignatius P. Reilly bemoaning  in A Confederacy of Dunces, “Oh, Fortuna…”, we will give luck all the blame.  I’ve found luck to be a valuable asset.

Like most people, my ego whispers in my ear telling me that I deserve all the good things but none of the bad.  I deserve the good, of course, because I’ve earned it, by God.  The bad stuff is caused by everyone else or just plain old bad luck.

Branch Rickey said that “Luck is the residue of design.”  I don’t know what the hell that means.  Another Baseball Hall of Famer, Grover Cleveland Alexander said: “I’d rather be lucky than good.”  I know what that means, and I agree with it. 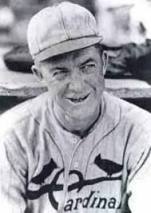 Grover Cleveland Alexander was a wise–and hard living–man. He looked like this at 40. Maybe he’d run out of luck.

I’ve had more than my share of good luck.  I’ve been married 24 years.  I’d love to take credit for that, but luck plays a role.  I’m lucky she married me and lucky she puts up with me.  I’m lucky to be alive.  I’ve done a stuff that could have killed me, but it didn’t.  Luck.

I’m not that important.  Seriously.  Neither are you.  Sorry, but it’s true.  If you’re lucky (that word again!), your family and maybe a few friends think you’re important.  Maybe your dog, too.  That’s about it.

What about work?  If you think you’re important in your job, try this:  Quit.  I did that one day.  Just quit a job I’d had for 18 years.  They were fine with it.  If you quit, some people will want you to stay, some will be glad to see you go and all of them will forget about you in a few weeks.

Of course, it’s possible that you actually are really important in your job.  Maybe you’re the best there is.  If you are, I’m willing to bet you monumentally suck at something very important in your life.  Back off your job and take a look at some of those other things.

You could also just die–the ultimate test of your importance.  The downside is that you may not be able to see what happens next.  Here’s what happens.  A handful of people are really upset, a few are concerned and most don’t give a damn.  That’s it.

Life isn’t a long, slow trudge to the grave.  At least it shouldn’t be.  Work, politics, religion, taxes, injustice–all those things will survive after I’m long gone.  Lighten up.

Once I lightened up (and it took years to do), I learned my final, most important lesson.

When Leon Trotsky was living in exile in Mexico, he famously penned in his journal “Life is beautiful.”  He wrote this knowing that assassins were after him and would soon succeed in their quest.  And they did.  I used to think Trotsky was a nut.  He wasn’t.

Life is beautiful.  Not only that, it’s good, too.  It took me a long time–too long–to believe that.  Why is life good?  Here’s why:

We all enjoy at least some of these.  If you don’t, you’re missing out, and it would suck to be you.