The world is a troubled place. Wars, terrorism, disease, hunger and the like plague us. I have no solutions to any of that. My mind remains clouded by one question: What happened to Glenn?

I am an unabashed fan of AMC’s The Walking Dead. I make no apologies for that nor will I offer any explanation. If you’re not a fan, there’s no point in your reading this. If you are a fan, you know Glenn is in trouble of the worst sort. You’ve likely thought of little else lately.

The last time we saw Glenn (four weeks ago at this writing–Season 6, Episode 3) he was on the ground amid a herd of walkers. (“Herd” is the most common word for a large group of walkers. Personally, I prefer a “stagger” of walkers, but the show’s writers continue to ignore me). Glenn’s fate has been determined by the dastardly Nicholas whose thanks to Glenn for not killing him culminated in a weakly mouthed “thank you,” followed by Nicholas’s suicide shot the head.

At the moment the bullet passed through Nicholas’s worthless head, he and Glenn were standing atop a dumpster surrounded by walkers. Mortally wounded, Nicholas fell into Glenn and both toppled into the walkers below. We then see Glenn silently scream while bloody entrails are ripped from him…or someone. 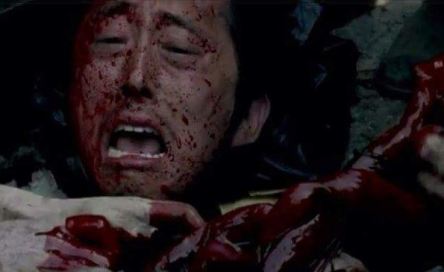 Glenn is dead. Or he isn’t. Or he is. Let’s examine the evidence.

Why would I think Glenn is dead? Consider:

GLENN IS NOT DEAD

How could anyone think he’s not dead? Well, think about it:

He could be alive.

If I’m not sure what happened,  I do know some things that didn’t happen–or at least better not have:

If none of these happened, how could he possibly be alive? I’m thinking he’s dead again. It’s hard to say, really.

I’ve studied this episode like it’s the Zapruder film. Yes, I know that Nicholas and Glenn ran past a fire escape. I, too, have screamed at the TV about this, hoping they’d hear me. They didn’t even look at it. I’ve read that one can hear a distinct “click” of any empty gun after Glenn emptied his, indicating that Nicholas’s gun was empty. If so, it’s all a dream. I’ve watched that scene again and again. Is there a click? Maybe. It’s there if you want to hear it. It’s also not there if you want it to be something else.

I can suspend disbelief with the best of them. After all, I accept the existence of walking dead people. I accept the fact that no one ever calls them “zombies” when, in fact, that is all they would be called in real life. All the dead people wear clothes? Okay. Ever notice that no matter how desiccated the dead are, they rip humans apart–by HAND, no less–in seconds? I don’t think that’s possible, but I’ll accept. It’s the same with tearing people apart with your teeth. We’re humans. We don’t have fangs. Why don’t the dead ever get really weak? I don’t know. It’s a TV show. I’ll accept a lot of things to be entertained. But, there is a limit.

If Glenn survives, it needs to at least be plausible within the show’s context. Consider this aerial view: 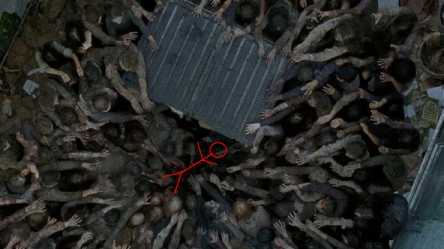 Where I come from, that’s called some deep shit right there. Where is he going to go? Maybe, just maybe, he slides under the dumpster and then somehow gets out. He has to sustain a couple of bites. Do they do replay of Sophia (one of the best scenes EVER, by the way) with Glenn staggering into Alexandria only to be dispatched by Rick? Wow. That would be lame.

How about this? Glenn is just gone. He never comes back, and we never know. In this world, that would happen, probably often. People would disappear. The problem–and it’s a big one–is that this cheats the audience. We are observers. We should know what’s happening even when the characters don’t.

(At this point, I must note that the comic book has a much different demise for Glenn. That’s a possibility, I suppose. The show has deviated from the comics many times. There’s no reason to think it won’t here, too.)

Oh, hell, I don’t know what happened to him, either. If Rick can get out of that SUV surrounded by walkers (same episode), maybe Glenn got out. Nicholas was a nut. He could have hallucinated or fantasized or whatever you want to call. Did you notice how hard Glenn hit the pavement when they fell? How did that happen? There was no clear space. He would have land on top of the walker herd. Why would Nicholas fantasize about Glenn screaming? Seems like you’d fantasize about yourself screaming. So many questions. I’m more confused than ever.

Oh well. Again, what happened to Glenn? I have a feeling that we’ll find out in Episode 607 (November 22, 2015). Whatever happens, I’m bound to be disappointed as I’ve convinced myself that no outcome can be satisfy me. I hope the writers prove me wrong.