I’m sure that every American has seen a clown. I don’t mean someone who acts like a clown. I’m talking real clowns with the garish make-up, fright wigs, baggy clothes and huge feet.

I don’t like clowns. I know that’s a classic cliché, but I’m serious about it. I really don’t like them. They’re not funny. They’re not even mildly entertaining.  I suspect  that clowns were created because people didn’t have television or even comics.  Anything would seem funny back then, especially back when there was stuff like the Black Plague and The Crusades.

It’s an insult to be called a clown.  “Hey, clown!”–those are fighting words.  What if I said:  “You should go see my doctor.  He’s a clown” ?  I guarantee you wouldn’t.  Clowning around isn’t good.  That’s how people get hurt.

Sports teams aren’t called The Clowns, with the exception of the great Negro Baseball League team, the Indianapolis Clowns.  I suspect they only got that name because the white man forced it on them.

I normally eschew research, but I have done a cursory review of the history of clowns. They’ve been around a long time. Evidently, ancient Egyptians started this foolishness. Clowns have been big in France for a long time. Of course. In France, they have serious, white-faced clowns called clown blanc. These are dignified clowns. One more reason to hate the French.  It also might explain why they love Jerry Lewis.  Jerry Lewis, by the way, made a movie called The Day The Clown Cried, which was so awful it couldn’t even be released.  Figures.

We Americans are known for our circus clowns. They tromp around in over-sized shoes doing “tricks” like stilt-walking, making balloon animals and juggling.  Those are all nifty, but shockingly annoying when performed by a clown.  Most of them, thank God, are mute. Sometimes, they show up at kids’ parties.  That’s always a downer.

My earliest clown memory was at The Ringling Bros. Barnum & Bailey Circus I attended in Knoxville, Tennessee when I was probably 6 years old. We sat near the floor and a clown made a balloon dog and gave it to me. He terrified me (the clown, not the dog). If he’d handed me a Chupacabra, I wouldn’t have been more frightened.

Oddly enough, I got a clown mask at that circus. It’s probably because I begged for stuff all the time for no reason. It was a white plastic “bald” head with a big red nose attached and shocks of red clown hair on both sides. Once we got it home, I couldn’t even look at it. My Uncle Jack wore it once without his dentures. He scared the crap out of me–and my mother. You don’t forget seeing a toothless clown smoking a Phillip Morris non-filter.

We’ve seen our share of evil clowns.   I think The Joker is a clown.  Captain Spaulding from The Devil’s Rejects is certainly a clown.  Of course, there is the Insane Clown Posse and its legion of Juggalos.  The modern-day clown does much more harm than good.

Stephen King knew that clowns weren’t funny when he wrote It about Pennywise The Clown. Pennywise lived in the sewer and killed children. The Master of Horror knew there was great symbolism in an evil clown floating among the turds. Remember the film, Poltergeist? A kid gets strangled by a clown. Clowns can’t be trusted.

Who is the most famous of all clowns? Emmett Kelly? Lou Jacobs? How about serial killer John Wayne Gacy? I bet a hell of a lot more people are familiar with his work. Part-time clown, full-time murderer.

John Wayne Gacy: He was a barrel of laughs.

Ronald McDonald may well be the best-known modern clown. His shtick involves peddling gut-busting fast food. In a way, he, too, is a serial killer. It may come as no surprise, but I’ve had serious beef with Ronald–and I’m not talking about a Quarter Pounder with cheese.

I once worked in a large law firm. I decided that we should work the phone bank during the PBS Spring Telefund Drive. Since I was in charge, I chose Saturday morning, so my kids could see me on TV.  A lot of kids would call.  It was always fun. Plus, we had a former Miss Kentucky hosting.

Now, this didn’t sit well with everyone. Some folks in my firm thought we should work during Masterpiece Theatre or some other haughty programming, as though our clients were sipping brandy and watching PBS in the evening. One of my partners simply said that he didn’t like Kentucky Educational Television. Now, that guy was a clown, figuratively speaking, at least.

One of oddities of those Saturday mornings was that Ronald McDonald worked with us. That’s right–Ronald Freakin’ McDonald himself.  Most of us know that there is no THE Ronald McDonald.  There are a bunch of Ronalds scattered about the country.  It’s like a gang.

This Ronald was a professional clown, for sure.  He arrived at the TV station with a couple of handlers–his posse, I suppose.  I imagined a limo with him sitting in the back dragging on a Marlboro and swigging Scotch.  That probably didn’t happen, but he did carry a gym bag with his big-ass shoes in it.  He would sweep into the studio in full regalia, like some kind of rock star. His job was to tempt kids to call in or, better yet, get the parents to do so.

Ronald McDonald engaged in one of his typical fraudulent phone calls.

Each year, I awaited Ronald’s arrival with seething contempt.  I would tell people things like that he was outside smoking (which he probably was, but I can’t prove it).  I would claim that he reeked of Jim Beam 8 Star.  I would deride his gym bag.  I told our host that Ronald was a “conceited jackass.”  She didn’t argue.  I would find out the extension for his phone and forward my calls to him. He would talk to our host in his stupid sing-song voice on camera and then sound like Krusty The Clown when the camera was off.  I imagined hitting him over the head with a folding chair during those breaks.  Who the hell did he think he was, anyway? 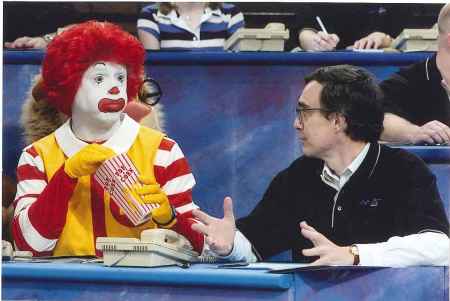 One of my law partners (he’s the one on the right) trying to explain some simple concept of telephone etiquette to the buffoonish McDonald.

Fortunately, I never attacked him.  I had enough trouble at that firm without being the guy who killed Ronald McDonald.  Oddly enough, I like McDonald’s.  Ronald, though, is another story.

I’ll admit that I had no real reason to dislike Ronald, other than the obvious–the clown thing. He’s probably a fine fellow. Maybe this says more about me than it does him, but you get my point.

Not everyone has the same issues with clowns as I do.  Some folks like clowns. Otherwise, we wouldn’t see them. I used to have a secretary who liked clowns.  At least she like Emmett Kelly.  She is a fine person. As far as I know, she has no affinity for serial killers or Ronald McDonald.

I once worked with a lady who would occasionally dress like a clown and do face-painting for kids. She was also a fine person, but the clown get-up made her look evil.  It didn’t really make her evil.  At least, I don’t think so.

Clowns are so freaky that psychology recognizes fear of them as a disorder. It’s called coulrophobia. Coulro is from the ancient Greek meaning “stilt walker.”  There is no record of clowns in ancient Greece, and I know of no one afraid of stilt walkers.  In any event, that’s what it’s called.  Clowns are so creepy that they caused a disease named after something almost totally unrelated to their evil.

If you are a clown, let’s get one thing straight:  I’m not scared of you.  I would gleefully beat your ass.  I just don’t like you.  If you think that’s fear, bring it on, clown!  See?  That sounds like an insult, doesn’t it?

If you want to be a clown, you can go to Ringling Bros. Barnum and Bailey Clown College.  Seriously (is that the right word?), you can.  Penn Jillette is an alumnus, but he’s not a clown.  Weird.

As a parent, I have many fears for my children.  I can’t imagine the horror of one of them telling me that he has decided to attend Clown College.  What could possibly have gone wrong in your childhood that Clown College seems like a wise career choice?  Then again, Penn Jillette has done quite well for himself.  Maybe I’m the clown.

So, if you’re a clown, and this offends you, I’m sorry.  Not really.  Almost no one likes clowns.  It’s time we all admit it.  I would enjoy your juggling and stilt walking just the same without the clown accoutrements.  Now, stop clowning around.