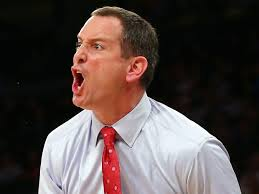 Until yesterday, I had never heard of Mike Rice, the now former men’s basketball coach at Rutgers University. Videos of his abusive treatment of players at practice have gone viral thanks to ESPN. Eric Murdock, a former assistant at Rutgers, apparently tried to get the University to intervene earlier. His thanks was the loss of his job.

Forgive me if I am a cynic about stories like these. Yes, Rice’s firing on April 3, 2013 was justified, but to pretend he was fired over the treatment of his players is as laughable as it is insulting to anyone of moderate intelligence. His abuse was well-known. It was the public revelation of it that cost him his job. Oh, and he didn’t win a lot. That may have been his greatest coaching sin.

Consider that his 3 year record at Rutgers was 44-51 with a 16-38 mark in the Big East. Don’t think for a minute that those sad numbers didn’t play a role in his firing. If Rutgers were preparing for the Final Four right now, this would still be a story, but I assure you that there would be a legion of defenders crowing about his “old school” toughness.

What did Rice do? He cursed at his players, physically attacked them and even threw basketballs at them. The video looks like a trailer for Dodgeball II with Rice in Rip Torn’s role. This being a blog and not fit for real publication, I can tell what he said without the need for asterisks. Among other niceties, he called his players faggot (that seems to be his personal favorite), cunt, pussy, bitch and fairy. One foreign player (who has since transferred) was called “Lithuanian Faggot,” which Murdock said practically became a nickname for him. If you’ve played sports on any level, none of this is all that shocking. We all know coaches who act like that.

What of the physical abuse? Rice grabbed players, kicked them, shoved them and hit them with basketballs. We all know coaches like that, too. If they’re successful, we respect them as tough. Who can forget the video of Bob Knight choking Neil Reed? Before you point out that it helped cost Knight his job, remember that the video was simply another nail in his coffin. It also didn’t help that he’d lost at least 10 games each year for five of the past six seasons and hadn’t gotten past the Second Round of the NCAA Tournament in six years. When he was having his greatest success, chair-throwing and cop-punching didn’t hurt his job security any. The psychotic chair-throwing incident is now the subject of a “humorous” commercial for Applebee’s. Perhaps one day Rice can join him with a new slogan: “Don’t be a faggot! Eat at Applebee’s!”

I’m a University of Kentucky basketball fan. We’ve had our own experience with this. After Tubby Smith resigned, UK hired an unpleasant misanthrope named Billy Gillispie. We greeted him with open arms. He was “tough.” Tubby was too soft. Billy Clyde was a stern taskmaster. Tubby was too lenient.

We soon heard stories of two-hour practices on game days, of players’ feet bleeding from running and other inane practices. We didn’t demand his firing. Why not? We wanted to see if he’d win games. He didn’t. Then, we were outraged at the thought of player being put in a bathroom stall at halftime or one being forced to eat Pop Tarts to gain weight! He was a mad man! A mad man who loses too many games and ends up in the NIT will soon be out of work.

Gillispie’s antics continued at his next stop–Texas Tech where they wearied of him after only one year. Tech is now wooing a veteran coach with a much different approach–Tubby Smith. Go figure.

Sports are littered with these guys. In past generations, Bear Bryant, Woody Hayes, Knight and Frank Kush were lauded for similar tactics. Is it any wonder that some in succeeding generations followed suit? Knight is praised by ESPN as a god-like figure, yet his behavior was every bit as contemptible as Rice’s. Dick Vitale loudly condemns Rice, while he fawns over Knight (“Robert Montgomery Knight,” as Dicky V calls him), like a school girl gushing over Justin Bieber. Knight had the good fortune to win. Winning, it seems, fixes everything.

They are hired, and we cheer them, because we think they’ll win. Sometimes, they do win. Then, they are heroes, hard-core old school coaches. Lose, and they’re embarrassments to university, the fan base and even their own families.

I have limited personal experience with coaches of this ilk. Only one time did one of my sons play ball for one of these types. It was baseball and, of course, it was a father who envisioned himself a real coach. This clown was an assistant on the team. My son bore up under verbal abuse throughout preseason practice. We made it through one game where my son was verbally abused in the dugout the entire game. When we complained to the head coach, he feigned ignorance, meaning that he was cut from the same cloth. That was our last game in that league. My son has gone on to play baseball throughout high school without a repeat of this kind of foolishness.

We live in a time now where people are keenly aware of bullies and peer-related abuse. We seem less sensitive to the bullying handed out by adults or authority figures, especially when the recipient isn’t a child. Perhaps it’s because college athletes are young adults and more capable of standing up for themselves. That’s a dubious rationalization to allow humans to be treated like chattels. Indeed, if a video surfaced of Mike Kryzewski kicking a player, he could probably talk his way out of a firing. I imagine that a video of him kicking a dog would likely spell the end of his career. What does that tell you?

One of the persistent myths is that sports build character. There is no consensus that this is true. I’m not aware of any studies to support the notion that mere participation builds anything positive. A study of intramural sports at the Air Force Academy concludes that it is only true if character-building is an intended part of the program. That shouldn’t be surprising. When your character is shaped by bullies, it can’t helped but be warped. I suppose there are people from such poor backgrounds that any type of order–even that imposed by a bully–is to some advantage. Of course, that may be the same type of thinking that causes people to join street gangs–some order is better than none.

Imagine trying to build a young man’s character by the example of Mike Rice. Or Bob Knight. Or Billy Gillispie. What life lessons do they learn? If people don’t act the way you’d like, attack them, physical and verbally. Always attack those who aren’t in a position to fight back. How different is that than Jerry Sandusky’s behavior? Yes, by degree, there is a vast ocean of difference. By effect, there may not be that much.

I’m not suggesting that coaches must be Sunday school teachers. My own children can tell you that I’ve yelled at them over such mundane things as making too much noise (as though my yelling would set a good example). Nor am I sensitive to foul language. In fact, I’m given to use it myself. But to excuse such behavior simply because one is a coach makes no sense.

There’s nothing special about being a coach. ESPN’s Mark Schlereth once said that the words “coach” and “genius” should never be used in the same sentence. That’s certainly true. I don’t have unrealistic expectations of coaches. I know that the vast majority of them are not musing about string theory when they aren’t working.

Winning takes care of most coaching character flaws. Embarrass your university, if you must. Just don’t lose a lot of games while doing so. Lest we forget, Rick Pitino is coaching in this year’s Final Four.

The answer to all of this is to clean out the Neanderthals of the coaching ranks. Zero tolerance would be nice. It would probably be effective, too, at least until one of these fools started winning games.

Incredibly, Rutgers Athletic Director Tim Pernetti claims he didn’t show the university president any of the videos until after the ESPN story broke, months after he’d seen them himself. Once the president saw them, so the story goes, Rice was fired. If this story is true, Pernetti should join Rice on the unemployment line.

One under-reported aspect of the story is that this isn’t Pernetti’s first experience with this kind of behavior.  Rice’s predecessor, Fred Hill, Jr., was fired after a profanity-laced tirade at a Rutgers baseball game.  As a show of support for his father, long-time Rutgers baseball coach Fred Hill, Sr., Junior loudly cursed at the University of Pittsburgh’s baseball coach.  Consequently, Hill, Jr. was fired.  His replacement?  Rice, who had just ended his coaching stint at Robert Morris University with his own tirade at the end of RMU’s overtime loss to Villanova in the NCAA Tournament.  Pernetti, it seems, may not be the best judge of coaching temperment.

By the way, Hill’s record in the Big East was 13-57.  Starting to see the pattern here?  Flip flop that record, and he gets a couple of months of anger management and a contract extension.

The responsibility lies with the administration of these universities–universities which make jaw-dropping revenues from these students. These revenues are not shared with the students but are used to fund the hiring–and firing–of coaches. When a university steps up and cleans out its athletic department, maybe that will change things. Of course, Rutgers is moving to the Big Ten now where it will make even more money. That, sadly, may be how Pernetti’s job performance is ultimately measured.

What of Rice? He’ll resurface. They always do. Some school at some level will think he can win. He’ll be contrite. He may even actually change, like Colorado State’s Larry Eustachy. Regardless, he better win.