August 11, 1987. Richard (left) and our parents help me celebrate my 25th birthday. Six weeks later, Richard would be dead.

Richard Kent Williams was five years younger than me.   He was my brother, and he’s been dead for over 25 years now–more than half my life.  “Been dead” isn’t exactly right.  He is dead.  It took me a long time to say that.   Passed, passed away, gone or lost were much gentler terms.  Eventually, I could say that “he died.”  Something about the past tense took the edge off it, as though one could die and that be the end of it.  This ignores the obvious:  those who die remain dead.  They are dead.  That’s the case with my brother.  He would be middle-aged now, but he isn’t.  He was 20 when he died, and 20 he remains.

Richard died in the early morning hours of September 26, 1987, but I’ve always thought of the 25th as the right date.  That was his last day.  He was a student at the University of Kentucky.  He came home to Harlan County for the weekend.  He had a rented tux in the back of his car.  He was going to be in wedding.  His last day.  He didn’t know it, but that was it.

My phone rang at 4:47 a.m. on the 26th.  It was my older brother, Tom:  “There has been a terrible tragedy….”  The rest is now just white noise.  Richard was dead.  He died in the parking lot of a movie theater in Harlan, Kentucky.  It was a handgun accident.  The details have long since become insignificant if, in fact, they were ever significant.  I called my parents.  As I expected, my mother couldn’t speak.  My dad spoke in an eerie, flat tone, almost devoid of emotion.  He said to hurry home but take it easy.  My dad was a tough guy.  I had never seen him upset.  Angry maybe but never emotional.  He just sounded tired.  Very tired.

I left Lexington with my girl friend (now my wife of over 25 years).  I’m sure I was in a form of shock.  Bursts of emotion were followed by almost a catatonia.  I just kept driving.  I didn’t know what to expect at home, but I knew it would be bad.  After our 3 hour drive, we got to my parents’ house.   I recall that there were a bunch of people at the house.  The first person I saw was my Dad.  He was standing in the kitchen, hands on the countertop staring straight down.  He turned and looked at me, his eyes glazed over and red.  “I can’t take this.”  That’s all he said.  This was worse than I expected, because if he couldn’t take it there was no chance for me.  Honestly, I don’t know what happened those few days until the funeral.  I know that Dad and I got Richard’s car from that parking lot.  We picked up his clothes from the funeral home.  There was a visitation and a funeral.  Lots of relatives came from near and far.  That’s about all I remember.

In my favorite film, Apocalypse Now, Col. Kurtz describes a massacre and says:  “I cried like some grandmother.  I wanted to tear my teeth out.  I didn’t know what I wanted to do.”  That perfectly describes those days.  None of us thought we’d survive it, but we did. We all did.  The world didn’t stop.  The mail ran.  Banks were open.  People went to work, to school.  Our world had stopped spinning, but the rest of it was humming along.  At some point, the inertia of that world carried us forward.  Dad said that going to Harlan was like “running the gauntlet.”  He was so weary of people telling him how sorry they were.    Mom stayed home, which was pretty much what she always did anyway.  One day, Dad told me that “there’s no such thing as not taking it.”  I knew he would move on.  For Mom, it always seemed to shadow her but she, too, continued on.  It got worse before it got better, but it got better.

We moved on.  A month after Richard died, I was sworn in as an attorney.  Four months after that, I got married.  Tom’s son, who was 8 at the time, is now a grown man in his 30’s with 2 kids of his own.  I have 3 sons, the oldest of whom (whose middle name is Richard)  is now older than Richard was when the clock stopped on him.  Mom died in 2003.  Dad in 2008.  Our grandfather died in 1998. Our Uncle Jack, who provided us with so many laughs as kids, died In 2013. We’ve also lost other aunts and uncles in that time.  Life did go on.  Cell phones, satellite TV, HD TV, the Internet, email, texting, another space shuttle explosion, 9-11, three wars, UK won three NCAA titles, and many, many other things happened.  The world is a much different place than it was in 1987.

Those who die young become tragic figures, often mentioned in hushed tones.  Sometimes, they are cautionary tales.  Sometimes, they are examples of the unfairness of it all.  My mother had two uncles who fell into this group.  Uncle Ollie was 18 when died on the USS Houston in the Battle of the Tonkin Sea in 1942.  Uncle George died when he was 8 of liver failure.  He died in the car while his parents were driving him to a specialist somewhere up North.  “Poor little George” was how he was described.  I hated hearing about him.  It was just too sad.

Richard became “Poor Richard,” part cautionary tale, part unfairness.  In hindsight, I came to view his death as a sign of the ultimate fairness.  No one is immune from pain.  We’ll all get a dose of it.  It isn’t my intent to offer anyone grieving advice.  I have no magic pill.  We all grieve, and  I suspect that it’s different for each person.  I don’t know how  other folks feel, and they don’t know how I feel.  We all soldier through the best we can.  I lack the abiding faith that some have that the dead “go to a better place.”  Perhaps that’s because I’ve never heard anyone say:  “Well, Grandpa just went straight to Hell.” Seems like everyone goes to a better place.   Some days I think of “a better place.”  Other days, I just think dead means dead.

Other times, the dead become saints.  Now, this is usually reserved for older people, but let’s be serious.  Not everyone was a great person who will be missed by all.  As my Dad said of a friend of his:  “His headstone should read:  He will not be missed.”  Yet, we canonize our loved ones.  It understandable.  But, c’mon, someone has to go to Hell, right?  Just not anyone I know.

You may be asking:  What is this blog about?  Here’s the deal:  Richard isn’t a tragic figure nor was he a saint.  He was a 20 year old young man who died.  But, before he died–and stained his memory–he was just a person.  I forget that sometimes.  I’ve made a point with my kids to never treat him as a shadowy figure, although to them that is surely what he is.   Here’s what he was: 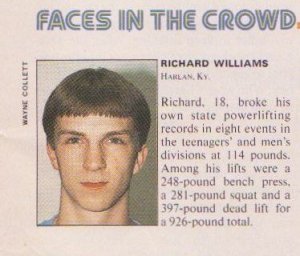 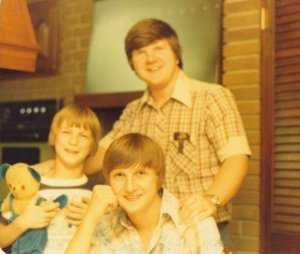 Like most folks my age, I’ve had my share of grief.  My parents died.  A close friend died unexpectedly.  Nothing ever hit me like Richard’s death.  It still resonates but doesn’t really hurt.  It’s  like getting hit with a hammer.  It would always hurt, but if you got hit with it everyday, you’d get used to it.  I got used to it over time. 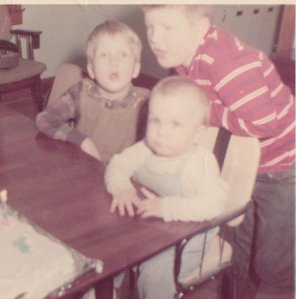 Tom and I serenade Richard on his first birthday. March 16, 1968

I would like to say that his death seems like yesterday.  It doesn’t.  It seems long ago, enveloped in the fog of a bad dream.  His life, though–that’s still fresh. He were kids together.  I was his big brother, and I always will be.  I wonder some time if he’d recognize this old man.  He’d probably give me grief about all this gray hair.

When Dad died in 2008, the jacket Richard was wearing when he died was still hanging in the hall closet.  My brother and I just stared at it.  Then, one of us decided to just toss it in the casket with Dad’s body.  Oh, the teddy bear was still there, too.  Teddy got a ride in the casket, too.  After that, some 20 years after Richard’s death, it seemed over.  After all, we wouldn’t bury Teddy for nothing.  Richard is dead, but that’s okay.  It happens to all of us.  It just happened to him too soon.