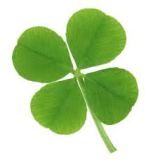 Luck has a bad reputation. People don’t like it. They certainly don’t want to give it any credit. We don’t care for the randomness of it. If we’re just plain lucky, how do we take credit for our good fortune? It’s antithetical to our desire for praise.  Bad luck is just plain unfair, and no one likes that.

People talk a lot of about luck, because we don’t understand it.  Sure, it explains all the success of our enemies and all our own bad choices.  Beyond that, it baffles us.  Why me?  Why not me?

Webster’s Dictionary defines luck as a “force which brings good fortune or adversity.”  Carl Jung called it synchronicity which means “meaningful coincidence.”  Luck can be good or bad.  We can luck out.  We can have a run of bad luck.  We can get lucky.  We can run out of luck.  There are lucky dogs and ducks.

Luck seems inherently good, although there surely is bad luck, just like bad Karma.  If you wish me luck, I assume it’s the good kind, but I could be wrong about that.  If you run out of luck, it’s always the good kind.  We know that you never run out of bad luck.

Those of a religious bent prefer to call good luck a “blessing.”  We’re not lucky. We’re blessed. On its face, that’s a selfless view. All credit goes to God. Even that view, though, gives us just a wee bit of credit, doesn’t it? After all, aren’t we just a tad superior if God blesses us while others suffer innumerable hardships? Or, maybe we’re just lucky that God blesses us.  Regardless, blessings, it seems, are of the good luck variety.

What of those who aren’t so blessed? Sick children, poverty and lives of abuse aren’t blessings. No one suggests that God indiscriminately curses them. Is there some evil more powerful than God? That seems unlikely. Bad luck? Perhaps.

Religions discount luck.  It runs counter to the sovereignty of God.  I’m sure the Bible speaks poorly of luck, although I don’t know that for a fact.  Damn the luck, as they say.

We are so concerned about luck that we think we can bring it upon ourselves.  Four leaf clovers, pennies and horse shoes will draw good fortune.  Black cats, broken mirrors and umbrellas opened indoors can curse us.  7 is a lucky number.  13 is so bad that buildings won’t have a 13th floor, as if calling it the 14th floor changes its fundamental qualities.  We crossed our fingers for good luck.  All of this runs counter to the very essence of luck–randomness.  We so desperately want to gather the good and avoid the bad that we conveniently ignore that.

There are different kinds of luck, good and bad.  There’s dumb luck, like the time I found a $20 bill.  There it was, just sticking out from under my car tire.  Maybe it was a blessing, and God wanted me to do good with it. I don’t remember what I did with it.  I was in college at the time.  I probably bought some beer.

There’s the luck of the Irish, which may not be good luck at all. The Irish haven’t been all that lucky, historically. Maybe that’s why they think nattily dressed dwarves will lead them to pots of gold. That would certainly require some luck.  I asked an Irish guy once about the luck of his people.  His eyes welled with tears.  I just dropped it.

There’s beginner’s luck which explains why people far less experienced than us do better than we do at certain things we’re supposed to do well.

There’s hard luck.  Ever heard a hard luck story?  It’s never uplifting.  It usually ends with the teller asking for money.  You do that with me, and you’re out of luck.

Speaking of being out of luck, have you ever been shit out of luck?  That’s always bad.  Again, what the hell does it mean?  It may well mean that one has, in fact, defecated away one’s good fortune.  If so, I can see how that is bad.

So, is there luck or is it, as Branch Rickey said, the “residue of design?”  I don’t know what the hell he meant, but I take it to mean you have good luck when you’re just better than everyone else.  Conversely, if your design is poor, you’ll get a boatload of bad luck.  There is plenty of evidence of both in the world.

Rickey was right, to some extent.  Post-it notes were developed because a strong adhesive turned out to be weak. Alexander Fleming discovered penicillin by accident.  These folks were, however, working on something at the time.  It’s not like Fleming just let some bread go bad and then cured an infection by eating it on a dare.

Certainly, if you win the Powerball, there’s an element of luck. Consider than twelve men have walked on the moon. Ten are still living. That’s one out of every 30 million Americans. Your lottery odds are one in a 150 million. Luck.

What if, as Warren Buffett describes it, you win the “sperm lottery,” and you are born into great wealth? You’re lucky, at least when it comes to money. One of your ancestors may have been, too, or he or she may well have earned every penny you have. You, on the other hand, lucked out.

Grover Cleveland Alexander once said “I’d rather be lucky than good.”  Alexander was a Major League Baseball pitcher in the early 20th century. He was a great pitcher. He won 373 games. He gave luck its due.  If I were him, I would have taken all the credit myself.

Tennessee Williams said “Luck is believing you’re lucky.”  That makes no sense, but Williams choked to death on the lid of an eye drop bottle.  That’s some hard, bad luck.

Lou Gehrig, another great baseball player, once said “I consider myself the luckiest man on the face of the Earth.”  He said this on Lou Gehrig Day, held in his honor because he had ALS, a disease so rare that they named it after him:  Lou Gehrig’s Disease.  If that’s good luck, no thank you.

Why do we call people lucky dogs? I think that’s because dogs used to be, well, treated like dogs. That was bad at one time, before we had dogs sleep in our beds and eat at our tables. I’m guessing that a dog who lived with people was just damned lucky.  Mr. Rickey’s theory doesn’t apply to dogs, I guess.

I’ve had my share of good luck, and I’d like to take credit for all of it.  Honestly, I can’t.  Some of it just happened.  Plus, if I take credit for the good, I have to take the blame for the bad, and that’s just not my style.

I don’t suggest you live your life hoping for good luck.  It’s random, after all.  Otherwise, it wouldn’t be luck.  I guess we just have to do whatever we do and take the good with the bad.  Good luck with that.