I make no secret that I love being an American.  I’ve always been an American, and I’ve always loved my life, at least most of  the time.  I might also like being Swiss or a Liechtensteiner, but I’ll never know.  I’m pretty sure I wouldn’t like being a Somalian.

Because I love being an American, I suspect that makes me patriotic.  I certainly have pulled for us in all the wars.  But, when I hear really patriotic people talk, I think I’m a wild-eyed anarchist.  The flag–the American Flag–more than anything else makes feel like that.

Being a bit of a gadfly, I’m leery of blind loyalty to anyone or anything.  Any time people speak of patriotism, I  think of the famous quote that we’ll know fascism when it reaches American because it will be “wrapped in the flag and carrying a cross.”  Some say that Sinclair Lewis said this.  It certainly sounds like something he would have said.

Nothing swells Americans with pride like our flag.  Old Glory.  The Stars and Stripes.  Unlike some countries whose flags have wild colors and sayings on them, it’s simply designed.  Fifty stars and thirteen stripes.  Red, white and blue.  We don’t have animals or people on our flag.  It’s not all busy and confusing.  I’ve always like the flag, but I don’t worship it.  I really liked the one the Air Force draped on my Dad’s casket.  My fellow Americans, however, are obsessed with the flag.

Prior to the American Civil War, the flag wasn’t so much a symbol of patriotism as it was a marker used to identify federal territories or possessions.  During the Civil War, it became a symbol of the union just as the Confederate flag was a symbol of rebellion.  Since then, the flag has taken on more significance.

Nowadays, the flag is venerated.  Rick Monday was a fairly good baseball player in the 1960’s and 1970’s.  He was a good outfielder, hit with some power and had good speed.  He’s known for two things.  One, he was the very first pick in Major League Baseball’s first amateur draft.  Second, he saved the flag.  During a game at Dodger Stadium in 1976, Monday was playing in the outfield for the Chicago Cubs.  Two “fans” ran on the field, threw down a flag and prepared to burn it.  Monday ran by and scooped it up with one hand just before it was lit.  He got a standing ovation.  Mention Rick Monday to a baseball fan of a certain age, and he or she will remember that moment. 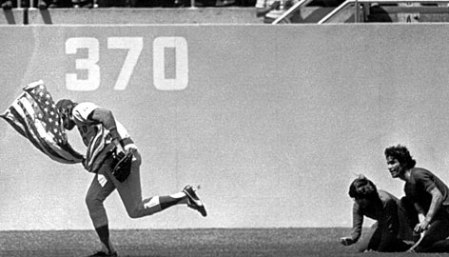 We like the flag so much that we have laws about it.  The Flag Acts of 1777, 1794 and 1818 tell us what the flag should look like.  We have a United States Flag Code which has rules about displaying and caring for the flag.  You can read it at 4 U.S.C. Section 1, et seq.  (I’m a lawyer, and that’s a citation to a statute).  Before you go scrambling to the United States Code to turn in your neighbor, there are no criminal penalties for breaking these rules.  Think of them as rules of etiquette for the flag.  Here are just a few of the rules:

This is okay, because Mrs. Palin’s bikini is not an actual flag. It’s not okay that she’s wearing a bikini, though.

First Amendment fanatic Larry Flynt. Wearing an actual flag as a diaper is not okay, but it’s not a crime.  Maybe it should be.

These are a just a few of the highlights.  There are a bunch of rules.  Only an anal-retentive Boy Scout could keep track of all of them.  Just be glad there are no criminal penalties. By the way, I was a Boy Scout–maybe it was a Cub Scout–for a couple of weeks.  What did I learn?  How to fold the flag, of course.

The bottom line is that we don’t like people being disrespectful to the flag.  People in foreign countries like to burn the flag–our flag.  You can tell they think that infuriates us, and it does.  Some of these folks will hit it with shoes.  That’s definitely a no-no.

Although the flag is iconic, the First Amendment to the United States Constitution allows us to desecrate it.  Like Mr. Flynt, we can wear it as a diaper if we so choose; however, I don’t suggest that, because it will make you unpopular in many circles.

Remember, though, it’s not a crime.  We Kentuckians have made it a crime under state law, Kentucky Revised Statute Section 525.110.  That statute is unconstitutional, of course, but we don’t care.   It’s still a law, even if we can’t enforce it.  We’re well-known in Kentucky for passing laws that can’t be enforced and for periodically embarking on Quixotic battles to display the Ten Commandments.  It’s part of our culture.

Of course, Americans have a Pledge of Allegiance.  Man oh man, the Pledge of Allegiance gets people worked up.  We’re supposed to pledge allegiance to the flag, by God, or so the argument goes.  No one ever explains why we should do this, but we should.  Some–like your author and The United States Supreme Court–believe that Americans shouldn’t have to pledge allegiance to God, country, flags, politicians or anything else.  We’re Americans.  We have the right to be apathetic or downright hostile about everything.

I often see posts on social media lamenting that schools don’t recite the Pledge of Allegiance.  This isn’t true.  My children attended public schools where the Pledge was recited.  Now, the school can’t force you to recite it.  That’s okay, at least with me.

If you’re going to get all worked up about the Pledge of Allegiance, consider:

This being America, we don’t force anyone–even children–to pledge allegiance to the flag.  Maybe you think we should, but such things as freedom of speech and of religion stand in the way.  It’s okay.  Those are good things, too.  Think about it like this:  If you’re one who thinks we should be forced to say the Pledge, imagine how you’d react if President Obama said that.  See?

We’re not the only country with a flag.  Other countries have flags, too.  All of them do, I guess, but we don’t care much for those.  Most of them are goofy looking with odd sayings and pictures on them.

Andorra has the typical weird flag combining a haughty crest with cows and odd foreign gibberish.

Some other flags just took no thought at all.  France, for example: 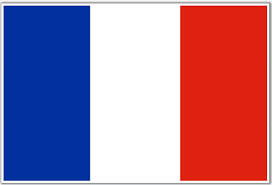 The French flag can be easily adapted in the event of surrender.

We want people to fight for the flag, too.  Personally, I wouldn’t do that, especially if I had time to think about it.  I’d probably let you have the flag if it were that important to you.  That’s not the same as fighting for one’s country, although I wouldn’t want to do that, either.

When we Americans get mad at foreign countries, we don’t take to the streets and burn their flags.  To us, that seems over the line.  Oh, we’ll invade your country, kill you by the thousands and overthrow your government, but we’ll be good to your flag.  That’s only decent.

All our states have flags.  Here is the flag of my state, Kentucky: 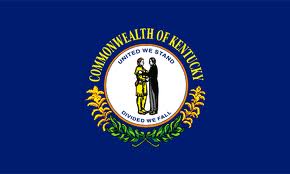 It states the fairly obvious maxim of “United we stand.  Divided we fall.”  I suppose the cartoon on it symbolizes country and city folk coming together.  We also call ourselves a “commonwealth.”  No one knows what that means, but we’re just a plain old state like everyone else.  Kentucky has its own Pledge of Allegiance:

“I pledge allegiance to the Kentucky flag, and to the Sovereign State for which it stands, one Commonwealth, blessed with diversity, natural wealth, beauty, and grace from on High.“

Notice that it doesn’t mention “God.”  I think people would be outraged about this if they knew we had our own pledge.  “On High” could be God, Jesus, Buddha or a bundle of sticks.

I’ve been told that this is Alabama’s flag:

Weird, huh?  It’s kind of like they’ve just Xed themselves out.  Then again, it’s easy to draw.

State flags aren’t as controversial.  I’ve never heard anyone accused of desecrating one, and I’ve never seen angry foreign mobs burning one.  If someone did, we’d probably get mad, but it would quickly pass.

Everyone knows the famous photo of the flag being raised at Iwo Jima.  It wouldn’t have had the same impact if they had raised the Kentucky state flag by mistake.

Some of our states are fond of the Confederate flag, the Old Stars and Bars.  Only in America could you fly the flag of a rebellion that cost hundreds of thousands of lives and almost destroyed your country.  Of course, a lot of folks are offended by that.  That’s also very American.  Do what you want, but others have a right to get pissed off about it.

Whether you’re conservative or liberal, you might be thinking:  “Hey, does this nut have some kind of problem with flags?”  No.  I’ve never desecrated a flag (at least not on purpose).  I don’t advocate such things, either, but I probably don’t love the flag.  And I certainly don’t insist that you love it or pledge some kind of oath to it.  Just don’t wear it as a diaper, unless you really want to.