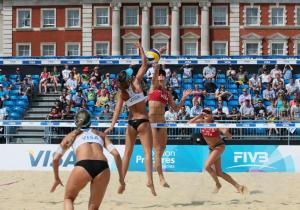 The thrilling sport of beach volleyball

When the weather cools down: 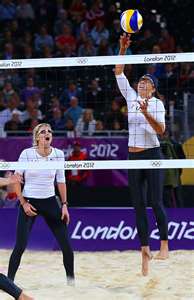 9. A LEGLESS GUY CAN REALLY RUN 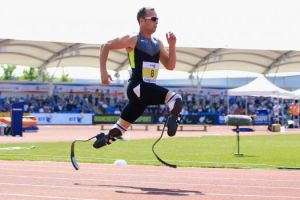 Everyone saw Oscar Pistorius, the amazing South African runner with prosthetic legs.  Some suggest that those legs give him an unfair advantage.  The fact that he’s a fast white guy tends to support that claim, but I’m willing to bet that any advantage is counterbalanced by NOT HAVING ANY FREAKING LEGS!  The only thing I didn’t like was that I kept expecting him to fall.  I know that’s stupid, but I did. 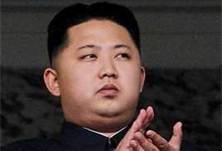 We all know that North Korea is a little “different,” but they take their sports seriously.   So seriously, in fact, that if you bring shame to the country by losing, you may find yourself in a gulag when you return home.  Their leader is the cherubic Kim Jong Un, son of the late Kim Jong il.  The elder Kim was the greatest golfer the world has ever known shooting a 38 the first time he ever played golf, carding an amazing 11 aces.  With a sports heritage like that, those in the North can’t be faulted for exalting their few sports leaders.  Gold medal winner Kim Gon Uk (I’m not making that up) said: “I won first place because the shining supreme commander Kim Jong-un gave me power and courage.”  Similarly, another medalist credited the “warm love and consideration” of the goofy-ass leader and his late father.  It’s nice to know that the Kims use their powers so wisely instead of on foolishness like feeding their subjects who regularly starve to death. 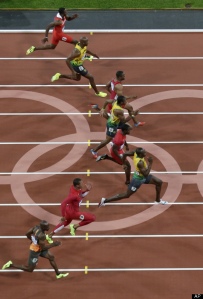 AP Photo/Mark Duncan
The 100-meter Men’s Final was the most exciting in history. It has a familiar look.

The Blade Runner notwithstanding, white men can’t run.  End of debate.  See the above photo of the 100-meter final.  If there was a white guy in that race, he’s somewhere in the back taking photos of these guys.  Okay, now you’ll say I’m a racist.  If I am, I’m against my own race.  Think about this:  Pistorius can fly, and HE HAS FAKE LEGS!  That should tell you something.

Strangely, white women seem to be able to run.  I don’t know what that means.

Someone once observed that the British somehow once ruled the entire civilized world but never figured out central air conditioning or that beer is better cold.  We Americans are kindred souls of the Brits having once been their subjects and all that.  They speak English and we do, too, kinda.  We’ve also been called on a couple of times to save their asses from speaking German.  .  So, we have a lot of common ground.  Maybe, but those pasty-faced weirdos out-did themselves with the opening ceremony.

I didn’t understand the opening ceremony.  It was supposed to be a history of Great Britain, I guess.  Clocking in at just under 12 hours, it was like a Monty Python skit without the humor.  There was even a touching tribute to 19th Century child labor.  Just when I thought it was over, it continued.  The only thing they left out was a certain total ass-whipping at the hands of their North American colonies.  Why did I watch it?  I have no life, I suppose.

I did enjoy the Parade of Nations.  Every four years I’m reminded about how little I know about other nations–many, many of which I’ve never heard of.

Apparently, there was cheating in boxing.  Yawn.

4. THE U.S. SUCKS AT TEAM HANDBALL

I thought handball was where you hit a ball against a wall with your hand–kind of racquetball without racquets.  It’s a sport if you’re poor and all you own is a ball.  I found out that TEAM handball is completely different.  It’s like water polo without water.  Your team tries to throw a ball into the other team’s goal.  It looks like something Americans would dominate.  We don’t.  Our men have a lifetime Olympic record of 5 and 26 and didn’t even qualify this year.  Our national shame.

3. THERE ARE ATHLETES WITHOUT COUNTRIES

I did not know that some athletes don’t have countries.  Why not?  Who the hell knows?  Maybe it’s because they all danced during the opening ceremonies.  What they did was enough to be expelled from any decent country.  This poor quality, bootleg video will give you a taste of their performance.  How could they be welcomed  home after that?

2. THIS GUY FAILED AT DIVING

Take a look at  this. Imagine having your big chance and doing that!  Don’t you feel better about your life now?  If that dude was from North Korea, he just punched his ticket to a labor camp.

1. GET RID OF THE JUDGES

Gymnastics, diving, boxing, synchronized swimming/diving and anything else that requires a judge isn’t a sport.  Yes, they all take great physical prowess.  But if you can’t score points or out run or out jump your opponent, it’s subjective.  Now, if you added defense to gymnastics–maybe attacking with big sticks–it would be better.  Combine diving and archery.  Synchronized swimming and the shot put.  Just get rid of the judges.

You may ask why I’ve compiled this list with the games still going on.  It’s simple.  Everything I like is over (except basketball), so I won’t be watching much more anyway.  See you in Rio!