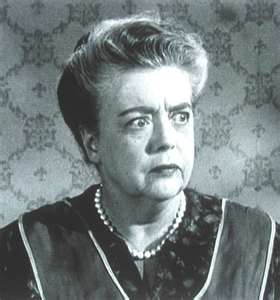 The Evil that is Aunt Bee

Like most people my age, I love The Andy Griffith Show or Andy of Mayberry as we used to call it.  It was the perfect TV show.  All the characters fit together seamlessly.  Andy and Barney really seemed like friends.  If you lived in a small town, you knew someone like Goober.  Even characters like Howard Sprague and Emmitt, though introduced several years into the show’s run, seemed like they had always been there.  Plus, Mayberry was the kind of town where you’d want to live.  That is was hilarious was a bonus.

The characters themselves were great.  Barney, of course, was the greatest of all TV creations (just ahead of Jethro Bodine).  I laughed myself silly at Ernest T. Bass.  The Fun Girls (“Heeelllooo, Doll”) were only in a couple of episodes but were classic characters.  Every person in Mayberry was alright, “good people” as we say.

The writers knew that the one basic requirement of good TV or film making is conflict.  Even in a 30 minute sitcom, you need conflict to push the story.  To do this, they created one character so vile, so meddlesome, so disruptive that it assured conflict whenever needed.  Of course, I’m talking about Aunt Bee, one of the most subhuman misanthropes to ever lumber across the TV screen. Only Torgo in Manos The Hands of Fate rivals her for sheer unpleasantness in a fictional character. 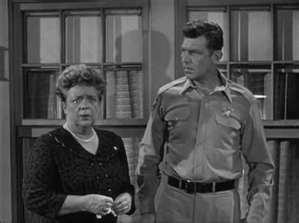 Andy thinking: “I’m the high Sheriff. I could shoot her and get away with it.”

Aunt Bee was Andy’s aunt, I guess, although the exact relationship is never explained. Since her last name is Taylor, I assume that she was the spinster sister of Andy’s father. As was painfully made clear when she bellyached about a statue of one of Andy’s ancestors, she was a blood relation for sure.

She was introduced in the very first episode when she came to live with Andy to help take care of him and Opie. Children often have a sixth sense about people. This was true with Opie. He wanted to send Aunt Bee’s freeloading ass packing the minute they met. Alas, he ultimately felt sorry for her and begged Andy to let her stay. Had he only known.

I’m not sure where Aunt Bee came from.  Seems like she was originally from Mayberry.  Floyd, at least, seemed to have known her for a long time.  Maybe they were lovers.  Odd, though, that it seems that Opie had never met her before she came to live with them.  Maybe she was one of those poor relations that you don’t talk about.  I had an uncle who worked in carnivals.  My Granny kind of treated him like that.

Aunt Bee was portrayed by Frances Bavier, an actress from New York.   During the first couple of years of the show, she tried to effect a southern accent.  She soon abandoned it for some kind of haughty accent which was probably how she really talked.  It fit her character, for sure.

Thus, began Aunt Bee’s reign of terror. It is almost impossible to catalogue the number of times Aunt Bee nagged, cajoled or browbeat the Taylors. Below I offer just a sampling of the times I was ready to dive into the TV mad garrote her. I have included in italics my writer’s embellishment offering common sense solutions to the Aunt Bee problem: 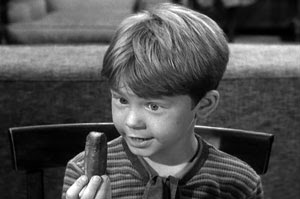 Poor Opie being forced to choke down Aunt Bee’s pickles.

Aunt entered her pickles in the county fair. Her big rival was the equally insufferable Clara Johnson (in later episodes she was dubbed Edwards). Aunt Bee’s pickles were an inedible abomination, while Clara’s were greeted as some sort of nectar of the Gods.

Andy can’t leave well enough alone. Instead of allowing Aunt Bee to be shamed in front of the town, he decides to replace her foul creations with store-bought pickles.  The store pickles are vastly superior to Aunt Bee’s and Clara’s, pointing out the common reality that “homemade” is not synonymous with “better.”

After finding out that Clara’s life is meaningless without that blue ribbon and that she may well stick her head in the oven if she loses, Andy and Barney eat all the store pickles forcing Aunt Bee make a new batch of her bastardized ones. Hilarity ensues, Clara wins the blue ribbon and Aunt Bee announces that will make even MORE because Andy loved them so.

Aunt Bee’s inability to make pickles–which, by the way are so foul that it begs the question of how you could screw them up–forces Andy to bend over backwards so as not to offend her.  This walking on egg shells around her was a common theme.

After Aunt Bee announces her plans, Andy looks at her with a steely glare and flicks his burning cigarette off her forehead. He then says: “I’ll say this once. I better never see another jar of those —-ing things again! If I do, Barney’s putting that one bullet square between your eyes! Oh, one more thing.  Even if we liked those damn things, who in their right mind would can 20 jars of pickles?  Jesus H. Christ!  They’re not a main course!”

THE SIDE OF BEEF

Andy spent many years building a good relationship with Mr. Foley, the town grocer. Aunt Bee blew it all to Hell by buying an ENTIRE FREAKIN’ SIDE OF BEEF from a new butcher in town. Her rationale was that it was a few cents per pound cheaper.

There was no place to store the mammoth purchase, save for a freezer which malfunctioned. Rather than heeding Andy’s entreaties to “call the man!”–as in the freezer repairman–Bee gets Gomer to repair it.  Of course, he can’t, resulting in the potential ruin of the new purchase.

Compounding all of this is that the meat is tough and not fit for human consumption. Having no shame, Bee then asks MR. FOLEY (!) to store it for her! For once Andy intervenes and puts an end to her bullying. He buys a new freezer and then has to listen to Aunt Bee bitch and moan about him spending too much money.

Oh, Andy! You DIDN’T buy a new freezer! I know someone who would be much cheaper. Andy responds: “The last time I checked, I’m the only one with an income around here. Why don’t you do me a favor and shut the hell up?  Better yet, why don’t you take that side of beef and the rest of your shit and move in with Gomer?”

Famous rock star Keevy Hazelton happens to stop in Mayberry. Aunt Bee and Clara ask him to listen to their song, My Home Town, a treacly piece of tripe that could have been written by tone-deaf chimps. Surprise! Keevy agrees to sing it on the popular Keevy Hazelton Show.

Keevy, apparently wanting to keep his fan base, rocks up the tune with a groovy beat. You guessed it. Aunt Bee gets completely hair-lipped and refuses to let Keevy sing it. Like most folks, he bows to her yammering just to shut her up.  He sings the song in its original version and it is quite popular, much to the surprise of both Keevy and the world at large.

Keevy Hazleton and Andy. Andy thinks: “Go ahead, Keevy. Punch her right in the mouth.”

I would have made it slightly different.  When Aunt Bee and Clara refuse to allow the song to be sung, Keevy says “Fine.  Get out of my sight!”  Security then removes them both from the set of the popular Keevy Hazelton Show.  Andy then berates them both for wasting his time driving them to Raleigh only to be embarrassed once again.  He then goes on another rant about the pickles.

(As an aside, the guy who played Keevy was also Johnny Poke on an episode of The Beverly Hillbillies.  He was quite funny.)

There was some kind of dust up in Mayberry where all the women insisted on being arrested.  Running out of patience, Andy threw them in jail, Aunt Bee included.  I don’t remember the details, but it had something to do with some kind of inane protest.  Predictably, the menfolk were unable to function, burning their dinner and clothes.

Here’s what I would have done:  She wants to be in jail, fine.  Go round up the Darling Boys on some trumped-up charges and throw them in there, too.  A couple of nights with those Deliverance rejects should teach Aunt Bee and her gang of gadflies a lesson or two.

“I could wheel around and back hand her, and there’s nothing she could do about it. Nothing.”

Aunt Bee was not the only annoying person in Mayberry. Warren was awful.  Howard Sprague’s mother gave Mrs. Bates a run for her money.  Emmitt was a bit of pain.  Mayor Pike? Whew.  These characters would come and go, making them at least tolerable.  Aunt Bee was a constant.

Andy showed remarkable patience with Aunt Bee.  Remember–this is the same man who threatened to shoot Goober over building a car in the courthouse.  Oh, he would occasionally snap at her but, by and large, he absorbed her abuse.  When he and Miss Crump married, though, he had the good sense to high-tail it to Alabama and leave her to terrorize Sam Jones and his kid.  Good move, Sheriff.

Just once, I wish Andy would have told Aunt Bee to shut up.  He told Goober shut up.  He’d yell at Barney.  Hell, he whipped Opie!  She got nothing but kid glove treatment.

Andy should have run off with Peggy, the uber-hot nurse he dated.  Even one of the Fun Girls from Mount Pilot–Daphne or Skippy–would have been an improvement.  He could have embraced an alternative lifestyle with Malcolm Merriweather.  Instead, he married Miss Crump, who was really nothing but a younger version of Aunt Bee.

Of course, I know that Aunt Bee is a fictional character.  Frances Bavier was real.  I would like to report to you that my scant research reveals that Ms. Bavier was a wonderful person.  She was, however, difficult with which to work.  Andy Griffith himself once said:  “There was just something about me she did not like.”  Regardless, most people deserve to be remembered for their best work.  We don’t honor Don Knotts for his work as Mr. Furley or Andy Griffith for his performance in Pray for the Wildcats.  I surmise that Aunt Bee was supposed be annoying and a source of conflict.  Frances Bavier played it well.

Interestingly, Ms. Bavier lived the last years of her life in Siler City, North Carolina.  She lived alone with a bunch of cats, but was by all accounts a nice lady but reclusive. She answered her fan mail and lived to the ripe old age of 86. She even called Andy a few months before she died to make amends for being difficult. When she died, the Studebaker she drove on the Andy Griffith Show was in her garage. 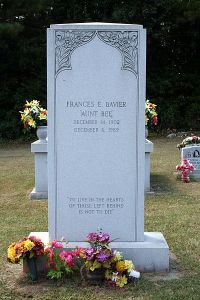 A native of New York, turns out Ms. Bavier embraced the Mayberry ideal as much as anyone by actually moving to North Carolina.  I guess she wasn’t all bad, even if Aunt Bee was.