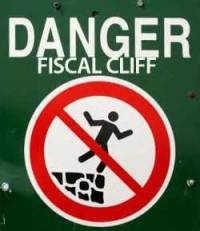 Hunter Thompson once said: “The edge… the only ones who know where it is have gone over it.” He later shot himself and had his cremated remains shot out of cannon by Johnny Depp. I’d say that’s somewhere over the edge.

Now we Americans are all on the edge–the edge of the dreaded Fiscal Cliff. Since I grew up in Eastern Kentucky, I like to call it the Physical Cliff, because that’s what we call our Fiscal Courts. You may also call it a “clift” if you like. Regardless of pronunciation, we are there, on the edge, ready for the plunge.

Perhaps the Mayans were on to something with their silly calendar. Maybe they knew there would be a United States and that it would one day be run by gaggle of twits. Maybe they picked December 21 because they knew no work would be done during the holidays and that might as well be the end of things. It’s hard to say.

What is the Fiscal Cliff? Since I eschew research, I don’t really know. I have, however, gathered bits and pieces of information listening to people rant and rave about it. As best I can tell, come January 1, 2013, tax rates go up and military and non-military discretionary spending goes down–all the way across the board. Every pet project and sacred cow in the spendthrift world of federal government gets cut. Taxes go up, too. And over the edge we go. What happens then?

Before you read further, bear in mind that I am not expert on economics or any other topic. Much of what you will read here is inaccurate. Some of it is just flat made-up. Regardless, it should provide a useful overview of the issues facing our great nation.

If you’d like to really learn about the budget, the Congressional Budget Office has a handy 100 page overview of the next couple of years. It’s like reading H.P. Lovecraft if he were a complete dullard or budget wonk. By raising taxes and cutting spending, the federal deficit will eventually be decreased by $2 trillion dollars, blah, blah. If you understand that, you’re miles ahead of me on this deal. Let’s face it: I don’t understand any of this. If that’s too confusing, maybe this will help: 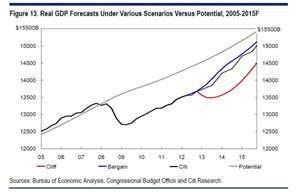 No? I’ve done my own, simpler graph to show the potential outcome:

The Cliff is some kind of Idiot Test for the federal government. This raising taxes and cutting spending is unpalatable to everyone. Those of a conservative sort have sworn their allegiance to someone named Grover Norquist. Evidently, he makes you swear never to raise taxes. (Don’t feel bad. I don’t know who the hell he is, either). The Left, of course, can’t palate not spending. Cuts are like taking Paris Hilton’s trust fund away. Sure, she would survive, but would life really be worth living? Both sides are united for their distaste with cutting ALL spending. So, the thought was, this plan will force these conflicting groups to agree for the betterment of all. Maybe it will. Maybe not.

President Obama wants to raise taxes. Why? More money, of course. Grover Norquist doesn’t want to raise taxes. Not now. Not ever. Why not? It’s just bad, I guess. As a result, the Republicans will entertain increasing tax revenue but not raising tax rates. What?!? I don’t follow it, either, but it’s okay to raise tax revenue by eliminating deductions or “loopholes” and broadening the tax base. “Broadening the tax base” means taxing people who don’t pay taxes now. Just don’t raise rates. This is called “tax reform,” not taxes increases, even though it would increase the amount of taxes paid. Get it? Me neither.

The Republicans demand spending cuts. Since the federal government is broke and getting broker (if that’s possible), this seems reasonable. Then, why don’t they like the spending cuts at the bottom of the Cliff? Doesn’t a massive cut take care of things and eliminate all the debate about what to cut? Nope. We can’t cut military spending. Why not? I’m not sure, other than we can’t. We spend as much as the entire world put together on our military. Reducing that would cripple us. Maybe it would, but that seems unlikely.

The Democrats are equally obstinate about social programs or, as the Right likes to call them, “entitlements.” “Entitlements” are handouts to people who don’t deserve them. Laggards, wastrels, layabouts. Social Security, Medicare and Medicaid are the battlegrounds. The Left doesn’t seem to grasp that the system was designed to function exactly the way it does. That’s why it’s failing. Overhauling it is a good idea. But, like many good ideas, Washington isn’t interested. These expenditures aren’t part of the Cliff, but the Republicans want them reformed.

Here’s a little secret: they’re not really cutting spending. They’re just going to spend less than they want. In Washington, you can actually increase the amount you spend, but still call it a decrease. This is called a “sequester.” They are sequestering the budget, which appears to mean that the budget won’t increase in 2013, but it will in later years.

To understand this, you must understand Washington Math. Spending “cuts” aren’t really cuts at all. They are more like reduced increases. Let’s say you make $40,000 a year and spent $50,000 this year. Next year, you plan to spend $60,000. Someone-me, for instance–says “Whoa, there, Rockefeller. You can’t do that. You have to decrease your spending!” You then decide to spend $55,000. Under Washington Math, you’ve just cut spending by $5,000. Make sense? Of course not.

But, you ask: “Wouldn’t increased revenue and decreased spending be a good thing?” Not so fast, genius. When it comes to money, the government is like my kids. They spend what I give them. Whether it’s $2 or $20, they spend it. Then, they ask for more. That’s how the government works. They’ll spend all the tax revenue. All of it. They’ll still spend more than they have, just less of it. Think of it as less of more.

So, we find ourselves at loggerheads. Democratic President, Republican House, Democratic Senate. Can they ever agree on anything? We stand at the edge, ready to plunge. At the precipice with us are the President, a pompous know-it-all determined to get his way, and John Boehner, the yam-colored, leathery Speaker of the House, who is also determined to get his way. If we’re going to take a tumble, they are poised to give a friendly shove.

What will happen if we plunge over the Cliff? Here is my prediction, based on nothing other than pure guess-work:

Don’t be alarmed by this nightmare scenario. Compromise is still possible. Indeed, it may even be likely. Here’s how it will work:

Taxes rates will increase on the highest earnings but not all that much. Loopholes will be closed, thus broadening the tax base. The end result will be more taxes for almost everyone. Republicans will save face by claiming that the President is insane and shoved it all down their throats by promising HUGE spending cuts, none of which will actually be part of the compromise. Spending, of course, will actually go up but less than projected. This will be called deficit reduction, even though the deficit will actually increase. Both sides will declare victory.

As you have no doubt garnered, it’s all rather simple. Now, enjoy your time on the edge. It’s where all the fun stuff happens anyway.