I tried to follow Alfred E. Newman’s advice–without much luck.

“What–Me Worry?” So says Alfred E. Newman, MAD Magazine’s iconic cover boy.  As a kid I read this as “whatmeworry” not “What?  Me Worry?” as intended.  I loved MAD, by the way.  Nothing thrilled my more than when Dad would pick up a copy for me at the store.  Secretly, Dad loved it, too.  But this post isn’t about MAD, although that would be cool.

I wanted to live by Alfred’s wise words, but I was always a worrier.  Here’s some crappy advice:  Try not to worry.  That just makes me worry about why I can’t not worry.

I was a born worrier.  Maybe it’s because my Mom fell through the back porch when she was 8 months pregnant with me.  I might have started worrying about what the hell was going on out there.  I was born on August 11, 1962 at 6:20 a.m.  I’m sure I worried about being born so earlier in the day. Would coming out this early disrupt my schedule?  It was Summer, too.  Would I be too hot in this new world?  How hard would it be to make friends?

I worried about stuff when I was a kid.  I even worried about other kids.  When I was about 6 or 7, a kid named Dennis Martin disappeared in the Great Smoky Mountains.  He was my age.  He just walked away from the campground and never came back.  I worried about Dennis.  Where was he?  What happened to him?  Would that happen to me?  Every now and then–some 40+ years later–I check the Internet to see if they ever found him.  Nope.  Still missing.

I grew up at Ground Zero for the War on Poverty.  Social workers would come to school and give kids coats.  I worried about the kids who didn’t have coats.  My uncle was a social worker.  He was the “Shoe Man.”  He would come in the class rooms and kids would stick their feet up in the air to show they needed shoes.  Personally, I never saw this, but he talked about it.  He talked, and I worried.

I’ve worried about my health.  Germs, disease, accidents.  Let’s be honest:  A lot of bad crap can happen with your health.  If you live long enough, it will happen, unless you get killed in an accident.  Geez.  Think about all the diseases and accidents that can happen.   This doesn’t even count the chances of running afoul of a serial killer, mass murderer, terrorist or random nut case.  I read a court case about a guy who got killed when one of his co-workers goosed him with a high-pressure air hose.  Blew out his colon.  What are the odds?  Who knows? But I stay the hell away from high-pressure air hoses.

I’ve worried about money, even though I’ve been fortunate enough to never have had any serious money problems.  That never stopped me from worrying about it.  Will I have enough to send my kids to college?  To retire?  What if I lose my job?  What if I can’t work?  These questions are all fertile worrying ground. 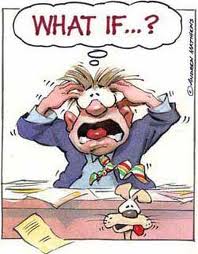 The good news is that as I’ve aged, I worry less.  I’d like to say that this is because I’m mature or just wiser.  The real reason is that there are fewer things to worry about, because I’ve experienced most of the things I’ve worried about.  That doesn’t stop people from trying to get me to worry about stuff. Nevertheless, it’s obvious–even to a worrier–that most of it isn’t worth the effort.  What it comes down to is “What if…?”  For some reason, I rarely think “What if…everything turns out GREAT?!?”  Fortunately, there are a growing number of things for which “What if…?” just doesn’t matter to me.

With that in mind, here are some things I won’t be worrying about:

There you have it.  A small list of things which won’t be on my mind. I’m going to add one more thing to the list every month or so.  Eventually, I’ll run out of things to worry about it.

For now, I’m not worry-free.  I still have plenty of things that are fret-worthy.  I worry about my children, which I guess most people do (I mean worry about their own kids, not mine).  And not just about their safety and futures.  What if they do something stupid?  Doesn’t that make me a bad parent?  Worse yet, won’t people think I’m a bad parent?  I also occasionally think I’m more important than I really am and worry about my job, becoming convinced that every thing I do is a referendum on my worth as a human being.  I still worry about sports for no rational reason.

I also worry that I blog too much.  Maybe it’s a sign of mental illness.  That’s worrisome.