I like horror movies, and I’ve seen a lot of them.  My earliest memory of being scared of a movie was The Ghost and Mr. Chicken starring Don Knotts.  Okay, it was a comedy, but I was 5 years old, and it scared me to death.  I saw it at the Roaden Theater in Loyall, Kentucky.  When I left the theater, I had chewed my shirt sleeve up to the elbow.

I’ve watched horror films in every sub-genre:  Monsters, zombies, Japanese, slasher, splatter, gore, vampires, werewolves, killers.  My favorites are ones with more atmosphere than blood.  An assault on my senses (or stomach) won’t scare me, even though I’ve enjoyed films like Saw and The Devil’s Rejects which infuse new ideas into the tired approach of shocking me.

If you like horror movies, here are five good ones.  You may know all of them.  You may not.  There are some spoilers here, but I’ll try not to ruin them for you.  I’m not including my favorites, The Texas Chainsaw Massacre and Halloween, because most folks have seen those.  I’m offering five, which while not necessarily obscure, may not be on many “can’t miss” lists.  These are the types of films you’ll either love or hate.  Horror, like comedy, is subjective.  With that in mind, here they are [WARNING–THERE ARE SPOILERS INCLUDED]:

The Bad Seed (1956).  This was directed by Mervyn Leroy (The Wizard of Oz) and is based on a play of the same name.   I first saw it when I was a kid and have watched it many times since.  The basic plot is that 8-year-old Rhoda (Patty McCormack) is an evil, murderous bitch.    She kills a classmate to steal his penmanship medal, kills her elderly (and extremely annoying) neighbor and burns the family handyman alive.  All of this action occurs off-screen. On-screen, Rhoda is a manipulative, preening, prissy-ass.  It turns out that her biological mother was a serial killer.  Once her adoptive mother finds out, she’s convinced that the girl is a “bad seed” and plans to kill her.  She can’t bring herself to do it and instead shoots herself.  I won’t give away the end of the movie, but I will note that it was changed from the stage play.  At the time, the Hays Production Code was still being followed and criminals were required to get their comeuppance in Hollywood.  I’m glad.  As a little kid, I don’t think I could have handled a different ending.

For a modern audience, this film may have its faults–a lot of dialogue, slow pace.  Why do I love it?  Because Rhoda is the creepiest, most vile child ever to be filmed.  She’s mean, scary and evil.  How bad?  At the end of the film, the cast is introduced on-screen one at a time.  The actress playing Rhoda’s mother then says:  “As for you, young lady…” and turns Rhoda over her knee for a spanking.  Why do this?  Because something had to be done to take the edge of that girl.  It didn’t work.  Every time I see the film or even a photo of Rhoda my blood runs cold.

The director’s effort at some comic relief at the end of The Bad Seed.  I would have preferred Rhoda being shot.

Patty McCormack continued acting into adulthood without great fame.  Wherever she is now, she can say:  “Ever see The Bad Seed? I was Rhoda.  Top that!”

The Baby (1973).  This may not be a horror movie.  Maybe, it’s a thriller.  I think it’s horror.  Directed by Ted Post, it defies categorization.  The “baby” is actually a 20-something man living with his demented mother and his two equally demented–and possibly perverted–sisters.  The film is pure 1970’s with short-shorts, pastels and wild acting.  Baby doesn’t have a name or, if he does, no one ever says it.  He can’t walk or talk and lives in a giant, freakin’ crib!

A concerned social worker (R) inquires about Baby’s living conditions and about why the mother needs a jacket and the sister is pantless.

Baby’s odd living arrangement draws the attention of a kindly–and persistent–social worker. The social worker quickly surmises that Baby is kept in his infantile state by his screwed-up family.  She may be on to something.  When one of the sisters screams “Baby doesn’t walk! Baby doesn’t talk!” and pokes him with a cattle prod, you get the impression that all is not well.

The story pales in comparison to the ending which I will NOT give away.  Let’s just say that the “twist” ending is a jaw-dropper.  I didn’t see it coming.  I’ve watched it many times on the Internet just to relive the total freakiness of it.

I assume that The Baby has fallen into the public domain.  The entire film is available on YouTube as multiple downloads.  Occasionally, I’ll watch parts of it again.  It’s always worth my time.

Ted Post wasn’t a great director.  He made some decent films (Magnum Force) and some bad ones, too (The Harrad Experiment).  This one, though, is his best.  I was entertained, and I never forgot it.

Dead of Night (aka Deathdream) (1974).  Bob Clark directed this one.  He also directed Black Christmas, which holds its own place in the annals of horror and A Christmas Story, which is now a classic of a much different genre.  He also managed to direct the Porky’s trilogy.  There may not be a director with a more diverse resume’.  Dead of Night was one of his earliest films and is simply great.

The story is borrowed from W.W. Jacobs’ short story, The Monkey’s Paw.  Andy is in Vietnam and gets shot.  As he’s dying, he hears his mother’s words when she made him promise to come home.  Andy’s family then receives notice that he died in combat.  Dad, Mom and Sis all freak.  Mom can’t accept it and spends her time muttering that Andy promised to come home.  Guess what?  He does, showing up at the door in the middle of the night in full uniform.  It’s all been a terrible mistake… or has it?

War changes men, but not like old Andy.   Now, he spends his time sitting in a rocking chair, wearing sunglasses and long sleeves at all times. At night, he livens up.  Mom wanted him to come back, but be careful what you ask for.  Andy has to prowl at night drinking blood to keep from decaying.  The film ends with a wild scene at a drive-in theater.

Andy is a precursor to the mysterious stalker in Halloween and many other films. I’m convinced that John Carpenter used the same lighting for the night scenes in Halloween.   Some shots, like when Andy is outside staring into a house, seem to have been directly lifted and placed in later films.  There is a creepy atmosphere of the unknown through the whole thing.  The acting is also excellent.

You know it won’t end well for Andy, but you like him.  He didn’t ask to come back.  They brought him back.  It’s part vampire, part Zombie, part Frankenstein, part slasher film.  Well done.

The Minus Man (1999).  Owen Wilson (!) is a serial killer.  And a good one.  He travels around poisoning people–people he decides don’t have lives worth living anymore.  He narrates the film explaining his methods (for example, he never stays in one place very long).  He also carries on a running dialogue with two imaginary police detectives, so he’s probably schizophrenic, too.  The tone, the acting-everything is understated.   It’s probably too slowly paced for some people, but I loved it.  Owen Wilson plays the killer as a nice, normal guy with only a couple of overt flashes that he’s not right in the head.  Brian Cox and Mercedes Ruehl are the couple that take him in.  They may be as unbalanced as he is.  Even Janeane Garofalo is excellent as his would-be love interest.

Is it a horror movie?  I think so.  It creeped me out from start to finish.  Screenwriter Hampton Fancher (Blade Runner) directed it.  As far as I know, he hasn’t directed another film.  I don’t know why.

Audition (1999):  This Japanese film is directed by Takashi Miike, a famed director.  Apparently, he’s made many excellent, shocking films.  I haven’t seen any of those other films, but I saw Audition.  That was enough for me.

The plot is complicated, but here’s a quick summary.  A lonely middle-aged widower wants to find a woman.  A friend suggests that he run an ad for a fake movie audition in order to meet attractive women.  One catches his eye.  He concludes the interview by telling her that he will call her.  A later scene shows her sitting in her empty apartment staring at her telephone.  Oh, the apartment isn’t entirely empty.  There’s a large burlap sack in the middle of the floor.  While our man has been trying to work up the courage to call her, she’s been staring at the phone for FOUR FREAKIN’ DAYS!  Finally, it rings.  The sack lurches forward with a sickening groan.  Okay, we’ve got us some messed up stuff going on.

A pretty girl. A telephone. A guy in a sack. Japanese weirdness.

Cutting to the chase, the man eventually gets up with her.  She’s demure and shy–until we find out that the sack contains a man whose tongue she cut out, along with his fingers and feet!  Oh, and she has a wee bit of a jealous streak.  Our man ends up drugged and tied to a table where she’s got some of the same sick crap planned for him.  I won’t tell more in case you want to see it.  At a film festival, an audience member reportedly screamed at Miike “You are evil!”  Indeed. 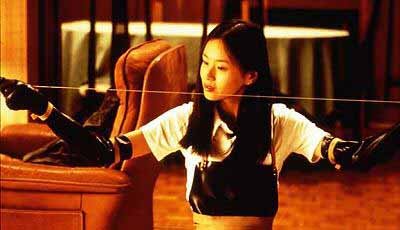 Here’s a sign your date has gone all wrong.

This film is an exception to my general disinterest in gory films.  Make no mistake: This film is in your face with some vicious imagery.  It is not for the faint of heart or weak of stomach.  What sets it apart is the complexity of the girl.  What the hell is wrong with her?  To some extent, her back story is revealed during the film, so you understand why she might have some relationship issues.  Her oddness builds.  It is revealed to the viewer much the same way it is to the man–quickly and with blunt force.  This is Fatal Attraction on acid.  I heard it called “cringe-inducing.”  That it is.  I would not watch it again, but I’m glad I saw it once.

So, there are five good ones.  Strange, creepy and scary.  You’ve been warned.  Enjoy.